If you’re just diving into the world of improvising with modes, it’s likely that you have a lot of questions. What is a mode, and how is it different from a key? How do you know what mode to use for soloing? What is the theory behind modes?

Brian from Zombie Guitar here! Firstly, I wanted to say a thank you to Adam, Musical U’s Communications Manager, who has given me the opportunity to do a guest post for Musical U.

The topic of this lesson is beginning modal improvisation. This lesson is going to be divided into three parts:

So with that said, let’s get started:

The number one most important thing that I want you to understand about modal improvisation is that modes are sounds. Modes have a specific sound that they produce, a specific feeling that is created with the music written in a particular mode. So the easiest way to understand this, even if you don’t know anything about modes at all, is to simply compare a major key to a minor key. These are, in fact, both modes! A major key is also known as the Ionian mode, and a minor key is also known as the Aeolian mode.

A similar situation happens with minor keys. If you write a piece of music in a minor key, your lead guitar player’s improvisational framework would be the minor scale. That piece of music would have a significantly different sound from the major song – it would sound darker, sadder, and more blues-y.

It’s very, very obvious that the Ionian mode and the Aeolian mode sound significantly different from one another. If you can understand that concept, you already understand that modes have their own unique sound, with the Ionian and Aeolian being the most instantly recognizable.

Starting with Aeolian and Dorian

You’re not necessarily modal playing when you’re playing in a major key or a minor key (respectively Ionian and Aeolian). You can call it modal playing, but for the purpose of the rest of this lesson, we’re going to look at the other modes: Dorian, Lydian, Mixolydian, Phrygian, and Locrian, as we can say that these are truly modal playing.

For this introductory lesson, I’ll be focussing on the Aeolian and Dorian modes, which are fairly straightforward to derive and understand.

If you refer to the instructional video, there were two modal improvisation examples at the beginning of the video. The first one was in A Dorian, and the second one was in A Aeolian. You’ll notice that they sounded significantly different from one another. While they shared the same root (A), they had uniquely different sounds. But the funny thing here is that the only difference between the Aeolian mode and the Dorian mode is one single note. Let’s look closer at that.

Part 2: Modes and the Minor Pentatonic on the Fretboard

We’ll do this by comparing the minor pentatonic scale to modes.

There may only be a one note difference, but this change produces a significant difference in the sound. If you want to improvise in either of these modes, the resulting solos will also sound quite different from one another.

Though the demos at the beginning of the instructional video only show the modes using a single position, you can expand this concept to span the entire fretboard. Here’s a still from the video where you see your A minor pentatonic scale spanned across the entire neck of the guitar, where all the white dots indicate every instance of the note “A” on the guitar: 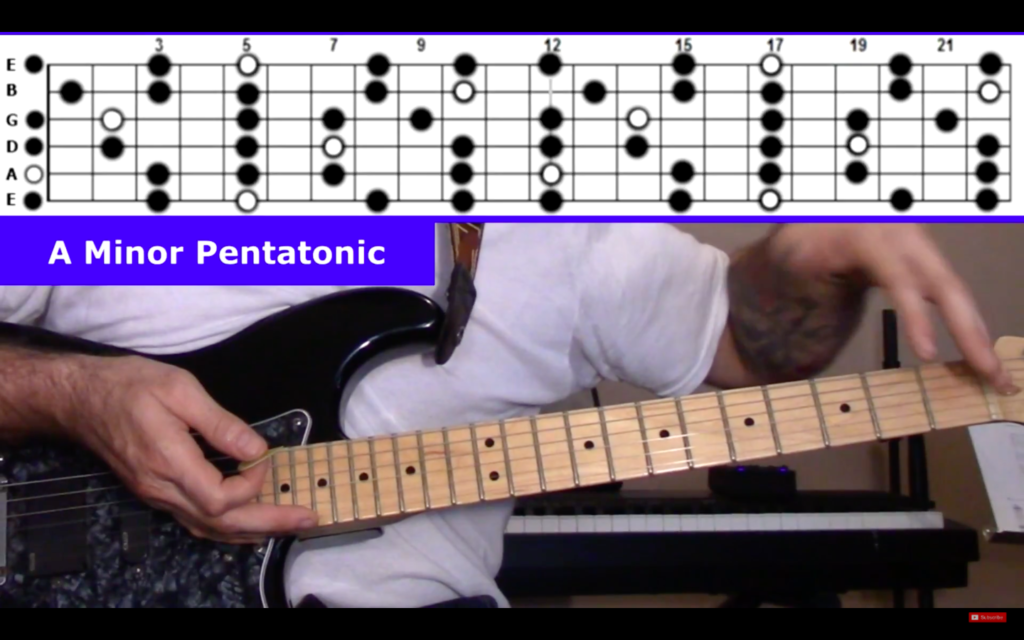 You can then go ahead and alter that one note every sixth degree, and the result is A Dorian mode.

Part 3: The Mechanics of Modes

Now, let’s take a peek behind the curtain and look at some theory.

Before we dive in, one thing to keep in mind is that sometimes, you can break the rules and even though it’s not theoretically correct it may still be the best choice, so always let your ear be the guide. As an example, if you decide that you want to play the Dorian mode as your improvisational framework over the top of something which technically should not use the Dorian mode but you think it sounds good, go ahead and do it! If it sounds good to the ear, it’s great.

However, to give you a starting point, let’s look at some modal “rules”.

Modes typically work best over one, two, or maybe three chords, but once you start getting into anything more than three chords you’re probably not playing in a mode, but in a key.

Essentially the easiest way to explain this is by taking a look at the circle of fifths.

The circle of fifths conveniently groups all of the chords for each key in groupings of six, like so: 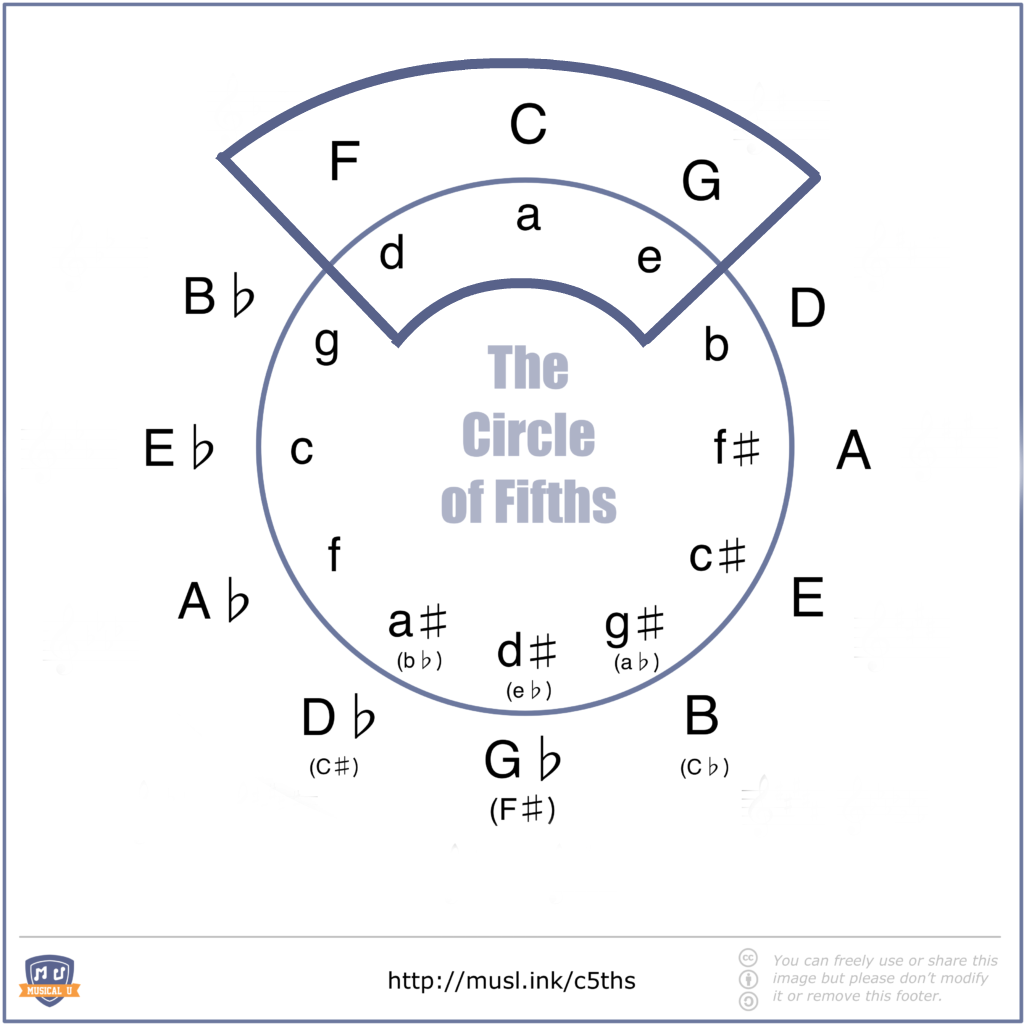 You can write pieces of music that use chords all within a single key. The more chords in a single key that you use, the more likely the song is going to be either major or minor.

The Aeolian mode and Dorian mode are both minor modes. This means they work best over single minor chords or over minor progressions. Again: the more chords you introduce into the progression, the more likely it is to be key-based and therefore, trying to apply a mode over the entire progression as your improvisational framework may not be the best course of action. In other words, the less chords there are, the more of a chance that a mode is going to work over the progression.

The progressions that I was using to solo over in the beginning of the video tutorial were in minor keys. For example, for the Aeolian mode, I was soloing over the progression Am-G-F-G-Am. Then, when I was soloing with the A Dorian mode, it was over a two-chord progression that repeated: the Am chord to the D chord.

So, how did I know to use the Dorian mode over the Am-G-F-G-Am progression and the Aeolian mode over the Am-D progression? You could use your ear and see which one sounds better to you, but I like to actually analyze the chords and see what key they’re in and see where they fall within the diatonic chords for each key. And the easiest way to do that is to take a look back at the circle of fifths.

I like to take a look and see what the chords are that I’m soloing over are. When I was soloing over the chord progression Am-G-F-G-Am, all those chords fell right into the grouping of six with the A minor at the center: 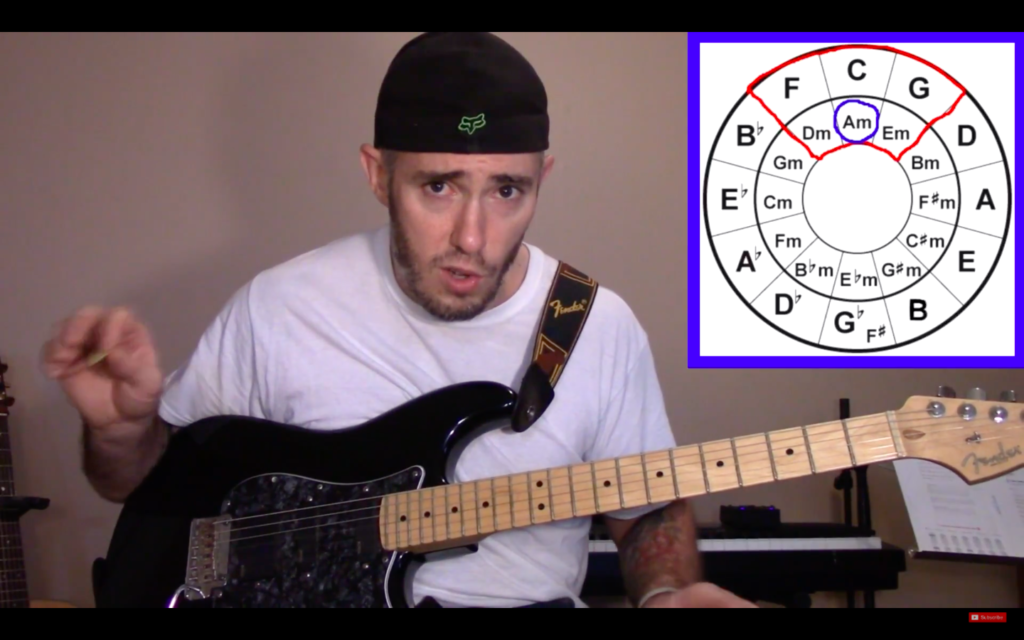 Because this grouping contained all the chords in the progression, it was pretty obvious that A minor (or A Aeolian mode) was the scale to use.

When the vi (minor) chord is present along with some of the other chords within its grouping of six, you can be fairly certain the piece of music is in a minor key and you should be using the Aeolian mode. If the vi (minor) chord is not present but another minor chord is present within the grouping of six, along with some other chords in there, there’s a good chance that modal playing will start to come into play. 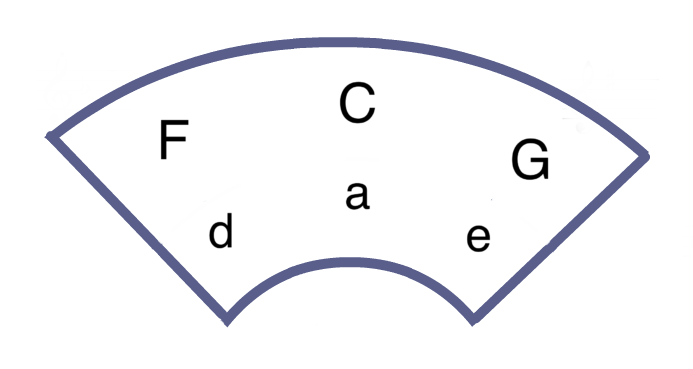 A minor right in that center position, the vi (minor) chord was present along with some other chords in the grouping of six. A Aeolian mode was the mode to use.

In the second example, we have only two chords: the D major chord, and the A minor chord. Find the grouping of six where both chords are present.

Here, the key of G is in the center, and the inner circle counterclockwise position is the ii (minor) chord. The Am chord falls onto this position. We’re in this other grouping of six now, which contains the ii (minor) chord plus another chord. In this situation, you can assume that the Dorian mode is the perfect choice, and as we heard, it sounded great over this two-chord progression.

Try analyzing some music you love to find some progressions that you can solo over with the Aeolian and Dorian modes. We guarantee you’ll find an ample selection, and the addition of a mode over the chord progression, your favourite song will go from great to wonderful! 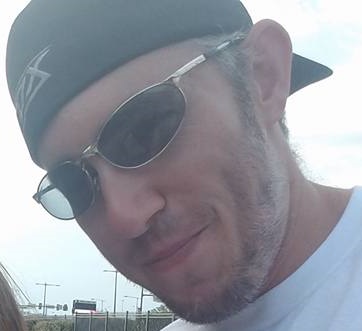 Brian is the creator of the Zombie Guitar and the Zombie Guitar Improv Course, which teaches players how to visualize and approach the fretboard, and apply music theory to the guitar to create incredible licks, phrases, and solos. A guitarist with over 24 years of playing under his belt, Brian has been the lead guitarist of Philadelphia-based cover band Fish Out of Water for the last 10 years.

The post Beginning Modal Improvisation, with Brian Kelly from Zombie Guitar appeared first on Musical U.