Many of us are familiar with popular major chord progressions like I–IV–V–I. Now it’s time to delve into the exciting world of minor chords. Minor scales give flavor and emotion to a song, adding a level of musical depth that can make a mediocre song moving and distinct from others.

Because so many of our favorite songs are in major keys, those that are in minor keys can stand out, and some musical styles like rock or jazz thrive on complex minor scales and harmonic wizardry.

Minor chord progressions generally contain richer harmonic possibilities than the typical major progressions. Minor key songs frequently modulate to major and back to minor. Sometimes the same chord can appear as major and minor in the very same song!

But this heady harmonic mix is nothing to be afraid of.

1. A Tale of Two Tonalities

4. The Top 3 Chords in Minor Progressions

6. Writing Your Own Minor Chord Progressions

A Tale of Two Tonalities

Western music is dominated by two tonalities: major and minor. While music written in major keys sounds bright and cheery, minor music tends to be darker and sadder, with chords to match.

Though it may be tempting for the beginner musician to stick to major keys only, the world of minor isn’t as sad as it seems – quite the contrary! Minor chords add a depth and richness to your music that major chords alone will not give you. Everlasting, perpetual happiness in music gets boring. And no, learning minor chords isn’t just for songwriters – they’re also a must for anyone who wants to improve their ear, cover others’ songs, and understand music theory.

Before we dive into how to build these melancholy minor chords, let’s compare major vs. minor chord progressions. Just take a listen to this famous R.E.M. tune “Losing My Religion” transposed to a major key. Characteristic of major chords, the song sounds unusually chipper and almost happy, regardless of the lyrics and meaning behind the song. Notice how the change from minor chords to major chords nearly changes the overall style to something that might fit better on a country radio station.

R.E.M. seems pretty chipper in this version of “Losing My Religion” in a major key:

What about the reverse?

Sure enough, transposing a song from a major key to a minor key lends a more brooding, melancholy feel to the song. Check out Chase Holfelder’s minor rendition of “How Far I’ll Go” from Disney’s Moana:

In the following six examples you are going to hear a chord. Is it major or minor? Can you grab an instrument and work out exactly which chord it is? Write down your answers and then check with the answers below.

How did you do? Were you able to tell which ones were major or minor? Bonus points if you could identify which chord you heard. If you answered all of the answers correctly, you can tell major chords from minor chords and you are ready to move on to chord progressions.

What if you need a little more practice? That’s okay! It just takes some time and practice to learn a new skill like hearing chord qualities.

Here are more great exercises and information on chords:

Before you can play with chord progressions, let’s talk about the different chords available in minor. Because there are three distinct minor scales – natural, harmonic, and melodic – some of these chords are altered based on which scale you choose.

While we are going to discuss these different scale variations here a little bit, it’s best not to get caught up in them: in the real world, minor melodies, and the chords supporting them, can vary between the different minor scales in the same piece of music.

Because of the way that we traditionally write a chord progression, where specific tones move towards the tonic or dominant for resolution, we often use the chords found in the melodic or harmonic minor scale rather than the natural minor scale. Without the G# leading tone, the natural minor scale can be ambiguous and lack movement, and can kill a tune by stripping it of musical motion.

To build a basic chord, remember you need to build up triads in the key. In A Major, the I major chord is A–C#–E, but in A Minor, the I minor chord is A–C–E. You have the tonic, the minor third, and the fifth. You can build up this minor chord on the starting note, or the tonic, of any minor scale. On guitar, you have multiple ways of building up any given minor chord, and you even have the option of adding more notes within the chord (for example, adding a high A on top of an existing A minor chord!).

Because A Minor, the relative minor of C Major, has a simple key signature with no sharps or flats, we will use this key for the examples. You can apply what you learn with A Minor to other keys.

Let’s look at the chords in the key of A harmonic minor, starting on each scale degree:

Because the leading tone (or G#) wants to move to the tonic A, you may even find the diminished chord built on the seventh degree of the harmonic minor scale.

When spelling out the minor chords, keep the key in mind. Listen for resolutions and progressions that bring movement to your song.

The Top 3 Chords in Minor Progressions

As we learned in the first part of this tutorial on Minor Scale Basics, the 5 (a.k.a. “dominant”) chord in a minor key can be the major version (V) or minor (v).

Listen to the audio example below. In the first audio sample, the progression includes the minor 5 chord, or an E minor chord (v).

Now, listen to the second audio sample. The third chord in the following clip takes the raised 7th from the harmonic minor scale, making the V chord an E major chord. Listen for the differences in the quality between the V chords from the first clip and the second:

When Resolution is Not Resolved

While you may write other chords in, like the ii chord (or submediant chord), you will most likely be moving around the i, iv and v (or V) chords of the minor scales.

Here’s a little cheat sheet for the common minor i–iv–v progression in each minor key:

Here’s a cheat sheet for the i–ii dim–V–i progression in each minor key:

Here’s a little cheat sheet for the i–VI–III–VII progression in each minor key:

Beyond these basic progressions, there are many more that suit specific musical purposes. For example, we have the classic ii–V–i, a popular jazz chord progression.

There’s also the somewhat-misnamed Andalusian Cadence, a i–VII–VI–V progression that is popular in an astonishing array of musical styles, from Flamenco to metal to baroque.

The i–VII–VI progression is similar to the above, popularized by famous tunes such as Adele’s Rolling in the Deep and Jimi Hendrix’s All Along the Watchtower.

We could go on, but that’s enough theory for now. Let’s put your newfound knowledge to the test with some exercises in minor chord progressions.

We’ll start you off nice and easy with some playalong exercises, then give you something a little more challenging and creative to try…

In this exercise you are going to practice playing along with chords following a simple minor chord progression: Am–Dm–E–Am. 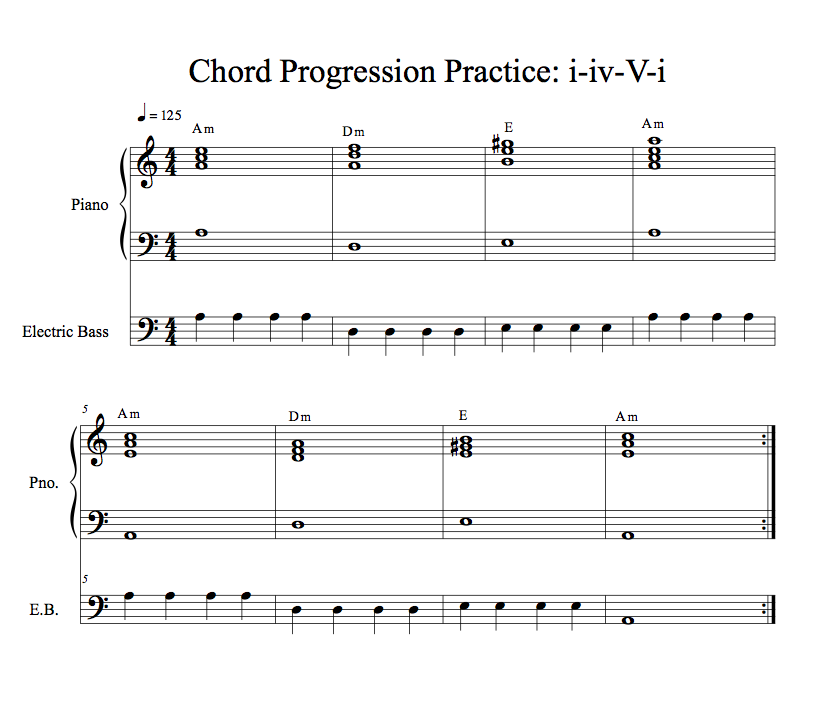 Remember that many chord progressions are built around these chords, using the i, iv, or V chord as a means to move the harmonic progression forward.

In this exercise you are going to practice playing along with chords following the simple chord progression: Am–B dim–E–Am. 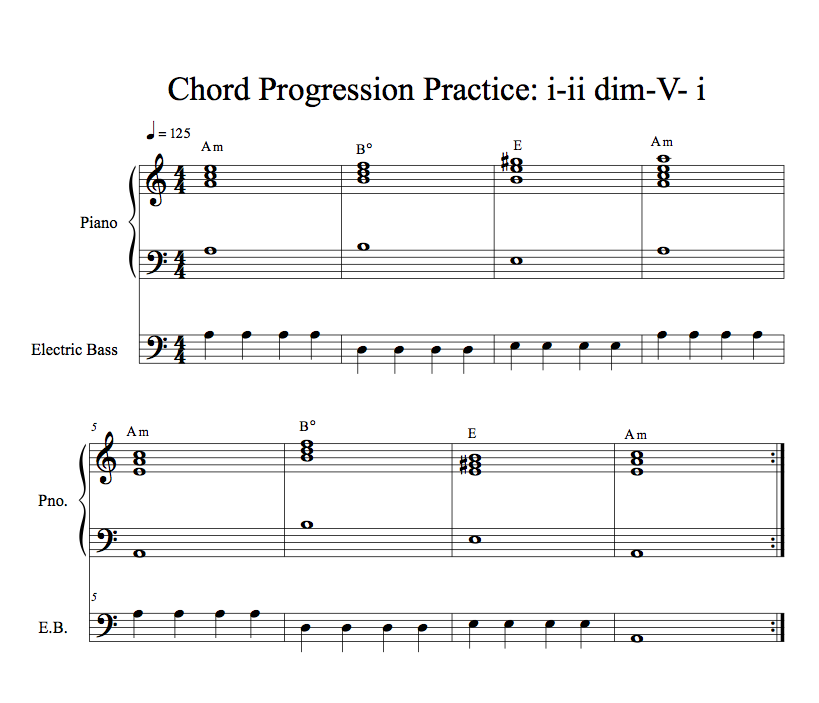 In this simple backing track to George Gershwin’s “Summertime” from Porgy and Bess, you can practice playing along with a longer minor chord progression in A Minor. While there are plenty of 7th chords in this track, you can easily drop the 7th and just play the basic triads like this instead: 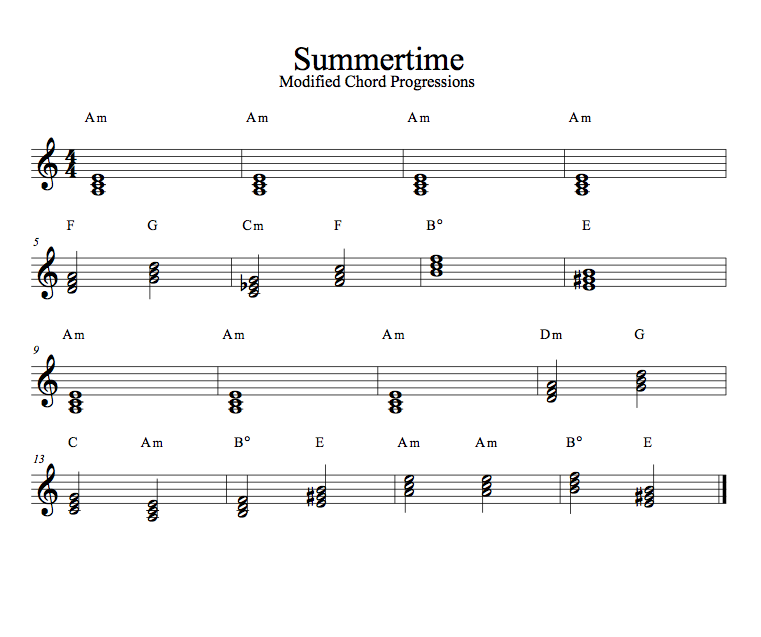 In this song you can hear how the chord progressions move towards the A minor chord and the E major chord. Remember than in most songs, the harmonic progression wants to resolve to the tonic (A) or the dominant (E).

If you find that playing along with the YouTube track is too difficult, then work with the modified chord audio. It always helps to use your ears to really hear for chord changes. Sometimes it can be difficult. Memorizing the sound and quality of the chords will help you as you learn these chords.

Notice that several minor key chord progressions can be extracted from this example.

In this article we talked about several different minor chord progressions. For this exercise you will need a piece of paper and a pencil, and your instrument. Choose a key to use for this exercise (you might like to start with A minor).

If you can’t play chords on your instrument, try playing broken chords or arpeggios instead.

Writing Your Own Minor Chord Progressions

Building Minor Chord Progressions with the Circle of Fifths

The Circle of Fifths is just as useful for writing minor progressions as major ones. A refresher: adjacent minor keys on the circle are always a fifth apart. Experiment with playing chord progressions that travel stepwise and clockwise around the circle – you’ll find some instant classics! 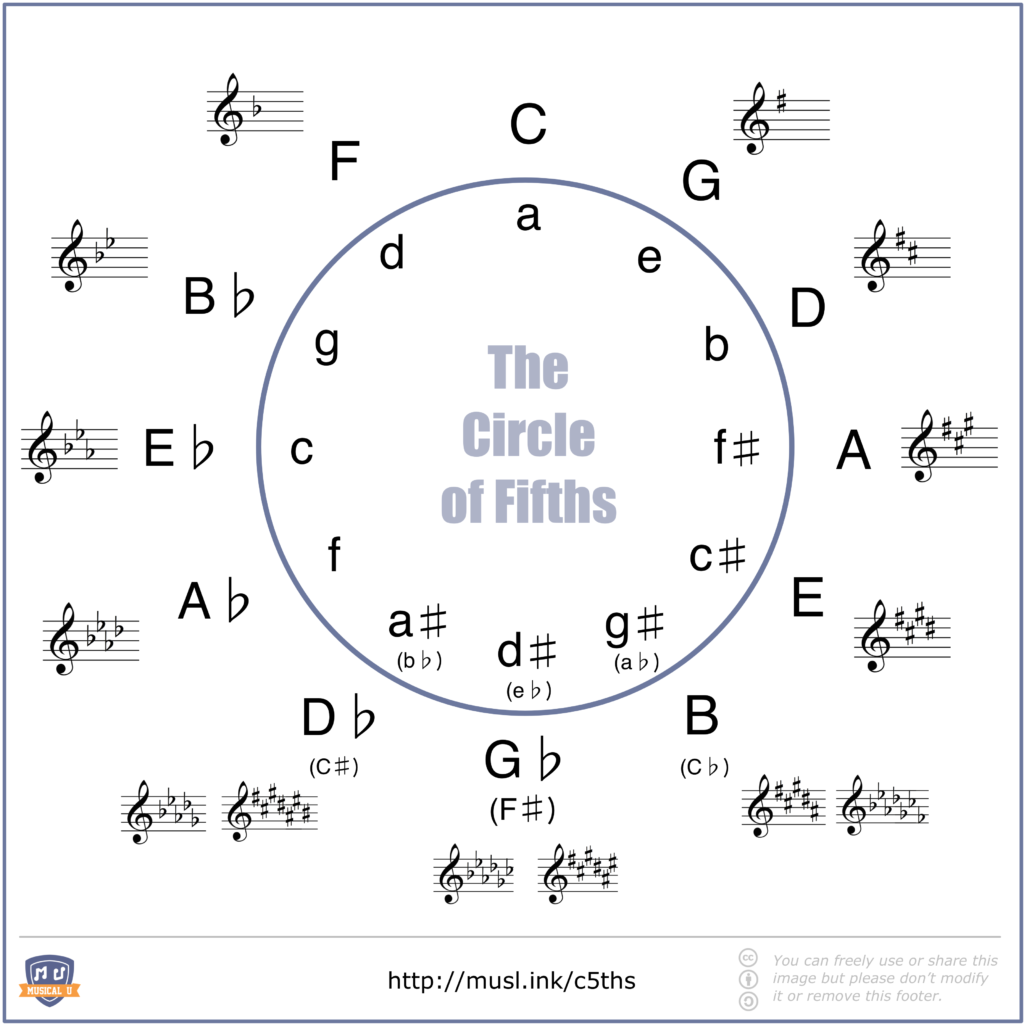 Match Chords to Moods to Lyrics

A sad song calls for sad minor chord progressions. But you can also throw some foreboding, tense, or even uplifting progressions in there to mix it up! Experiment with marrying specific progressions with certain moods in your song. Which ones fit best with certain parts of the song?

Use A Chord Progression Generator

If your fountain of creativity has run dry (and we doubt it ever will, considering the infinite possibilities of chord progressions!), try this Chord Progression Generator. Simply plug in the genre, feel (happy or sad?), and key that you want, and the generator will spit a readymade progression right back at you!

There are many, many popular minor chord progressions. You have learned a few in this article and can use the practice tracks to continue to work on your musical skills. Continue to learn new progressions, and combine progressions together to make longer songs.

Experiment with chords and scales, combining both major and minor keys in your songs and training your ears for more kinds of minor chord progression. As you continue to expand your harmonic palette, you will be amazed at what you will create!