The first step in learning how to improvise is to understand a few musical basics. If you think about it, it makes little sense to play music without a basic understanding of how music works; yet this is what many people do.

It’s like a painter randomly mixing colors on a palette in an attempt to create the perfect shade. Sure, you could randomly mix colors and eventually find the correct combination through trial and error, but wouldn’t it be easier to learn basic color theory so that mixing colors becomes faster and easier?

Learning basic music theory is much the same. Instead of flying blind, you will understand the mysteries of music and use that knowledge to your advantage while playing and improvising. Fortunately, it’s not that difficult. With a little practice you will have this down in no time.

The perfect starting point for improvisation is to familiarize yourself with the major scale. By learning this basic seven-note pattern, you can create licks and riffs that are guaranteed to sound good, in whatever key you please.

Let’s start with examining the 12 notes of the chromatic scale, look at how to derive the major scale from it, and learn how to build our own melodies, licks, and riffs from it. For those already familiar with the major scale, and who are looking to jump right into improvising with it, click here!

12 Notes of the Chromatic Scale

There are only twelve notes in our music system: 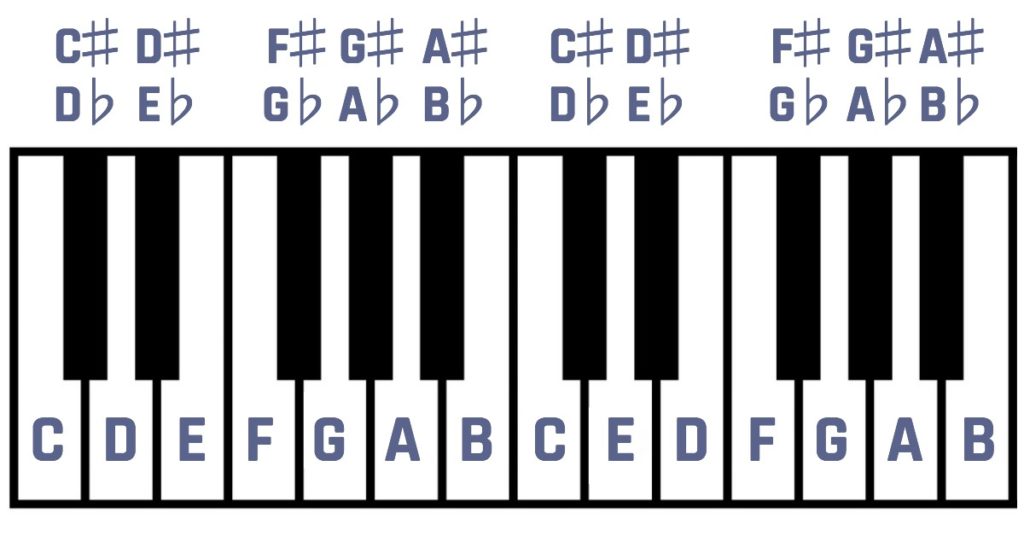 Although there are 88 keys on a piano, the keys are nothing more than 12 notes repeating over and over, getting higher in pitch as they move from left to right. The notes of the chromatic scale are the building blocks of music and everything derives from them. A, B, C, D, E, F, and G are the white keys on the piano. A♯/B♭, C♯/D♭, D♯/E♭, F♯/G♭, and G♯/A♭ are the black keys, and these notes are called enharmonic notes – notes which can be called sharp (♯) or flat (b) depending on context. It’s important to understand that each enharmonic note, for example A♯/Bb, is one note with two possible names, and not two separate notes.

Half Steps, Whole Steps, and Octaves

Now that we understand the chromatic scale, we need to learn how to use its 12 notes to build major scales, the most commonly used scales in Western music.

The major scale is the do, re, mi, fa, sol, la, ti, do pattern that you likely learned in school. It’s hard for students to believe that this simple pattern is the basis for most Western music, but it’s true. All major scales can be built with a simple formula using whole steps (W) and half steps (H). The first note of the scale is called the tonic (T) and is the note name of whatever scale you are building. For example, in C major, the tonic is C, which is the note the scale will start on.

Here is the whole step and half step pattern that every major scale is built on: 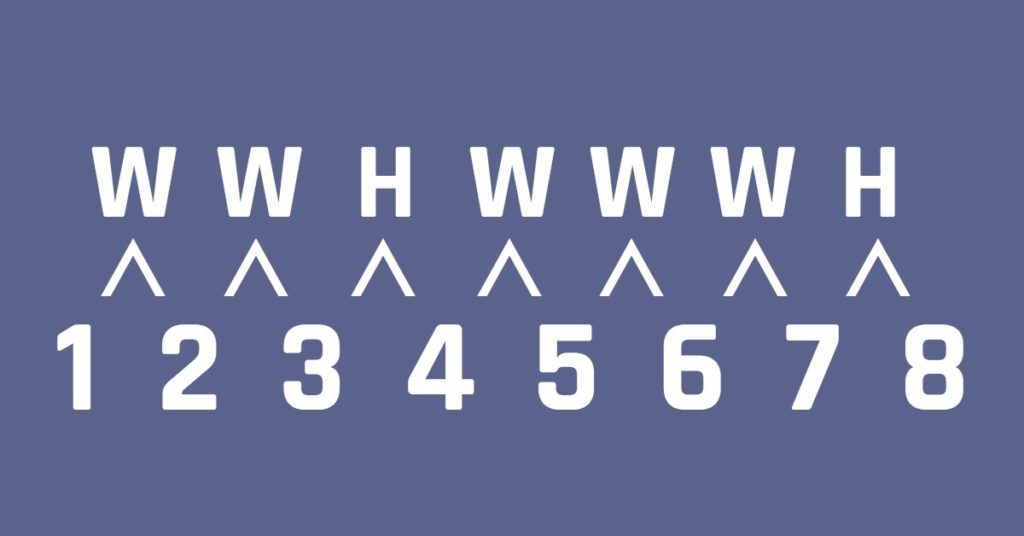 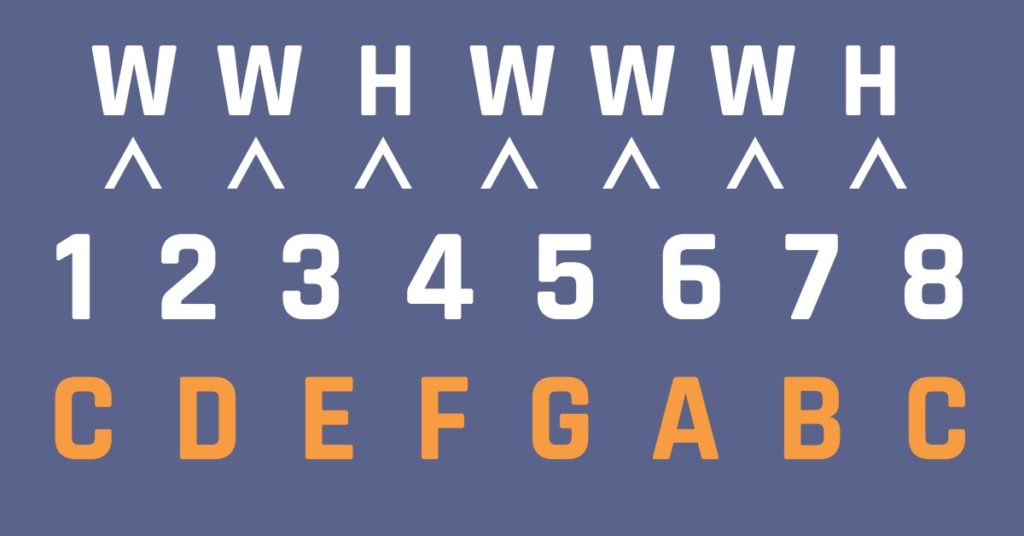 Play this series of notes. See that it’s the familiar do, re, mi pattern you already know. Now let’s build another major scale, this time G major. Take another look at the major scale formula, and try this one yourself! The answer is below. 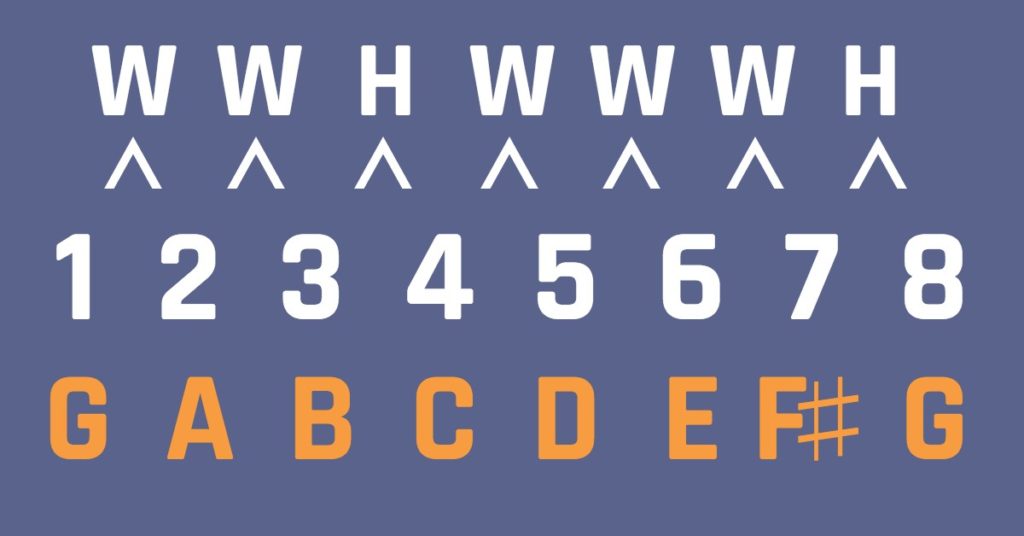 To give you an analogy for the relationship between the two scales, a simple number pattern of 2, 4, 6, 8 is built by counting by twos – the same as 12, 14, 16, 18. The only difference is that one begins on 2, and the other on 12. Major scales work much the same way. There is a major scale for each of the twelve notes of the chromatic scale we discussed at the beginning, and each follows the exact same pattern.

Why All This Matters

Major scales are the most important scales in Western music. Yes, minor scales have been around for a while too, and these days you hear quite a bit about modes. But if you know your majors, the other scales are much easier to figure out.

The first thing we need in order to improvise is a chord progression to play over. Let’s use the progression C-F-G-F, with each chord played for four beats.

Here are the notes of each chord:

Record yourself playing this chord progression on your instrument, and loop the recording. There are many looping apps you can download for free on your phone, and there’s plenty of looping software to be found online. Another option is to use a looping pedal, if you have one.

If you’re more advanced, you can play the chord progression with your left hand on a keyboard while you improvise with your right. However, it’s better to loop or record the progression when you’re starting out, in order to concentrate all of your attention on improvising.

Once you have a loop or recording, we can start improvising using the notes of the C major scale. Here’s a reminder:

All of the notes of the C major scale are compatible with the chords listed above. This is not to say that some notes won’t sound more interesting than others or that you can just mindlessly play them over the chord progression. None of the notes, however, will sound necessarily wrong.

Start by playing the scale in order, both ascending and descending over the progression. Let each note be one beat:

But this isn’t interesting, and it certainly isn’t improvising. So how do you improvise? The first step is to come up with short little ideas called motifs.

Think of motifs as sentences. When we speak in sentences we say a few words, then there is a pause and a breath. Improvising with a series of motifs is much the same. Think of the opening to Beethoven’s Fifth Symphony. Da, Da, Da, Da! Notice how the piece follows the same short pattern or motif. Each has the same rhythmic value but each time the notes themselves change.

So how do we come up with motifs to use with our chord progression?

The best way is to show you an example. Following the lead of Beethoven, I will play a series of motifs with mostly identical rhythms but will change the notes as we go. Here is my motif:

Play this over the chord progression. Play it over and over if you like. See how it breathes. Notice the pause before it starts again. Make your playing imitate vocals. While you can theoretically play forever without stopping, it doesn’t make sense to the ear. Instead, play phrases and let them breathe, just as a vocalist must pause for a breath.

Now, let’s change this motif and create what we call variations. Notice the rhythm is pretty much the same, but the notes in each variation change. This is the beginning of what we call a theme and variations:

Variations on a Theme

Play each motif over the looping chord progression. Notice the slight changes in melody. Now play them together in order to hear the complete musical statement. See how it seems to make sense and sound satisfying? 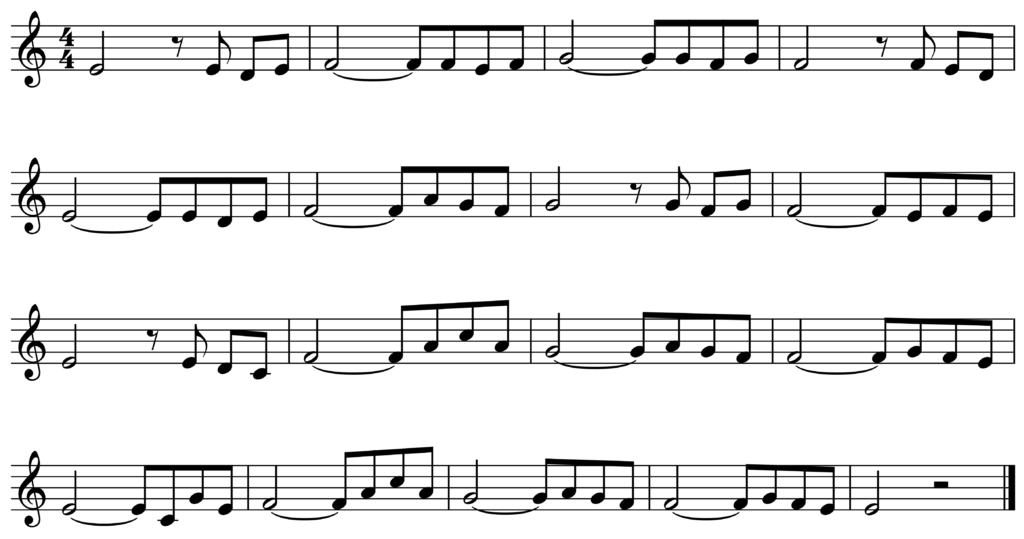 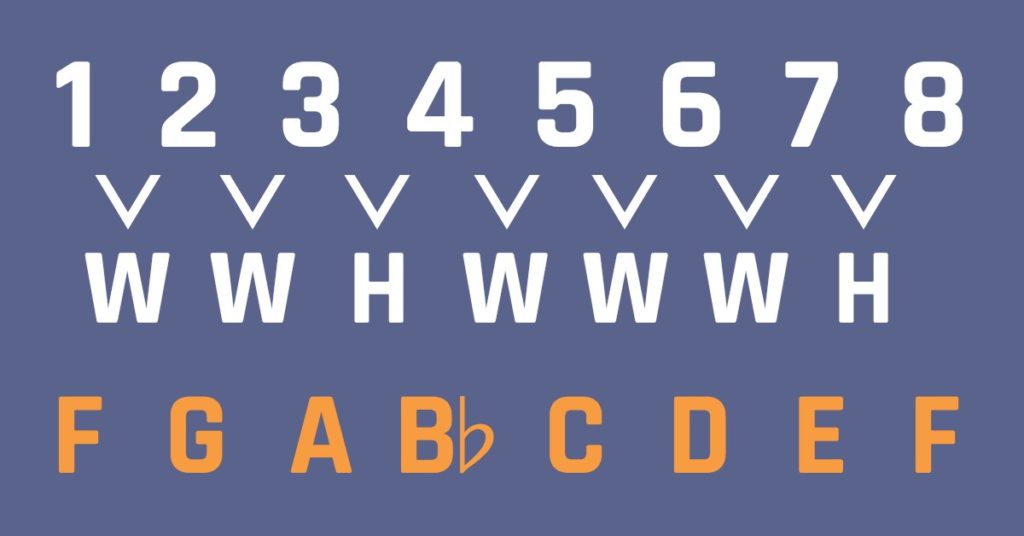 Chords in the I-IV-V Progression

Beyond a Single Motif

Of course, this scale-based method is only one way to improvise. Eventually both the rhythm and melody would need to be changed in order to avoid getting boring. When this happens you are essentially starting a new motif. The new motif can be an expansion of the first, or a new one altogether.

Eventually you will be able to come up with ideas such as these off the top of your head in real time. Until then, however, it will help to plan them out a bit, just as I did above. Now come up with your own motif using the notes of the C major scale. Just play any short phrase you think sounds good over the chord changes.

Next, write variations using the same rhythm you chose. Eventually you can continually change rhythms but for now let’s keep it as simple as possible. Also, don’t be afraid to just noodle and play various series of notes. Sometimes, this is where your best ideas come from.

Finally, play your completed series of motif and variations over the chord progression.

Please understand that you likely won’t be amazing at this the first time. Just like anything else, it will take practice and patience. Players who are great sight readers but have never tried improvising often find this process especially frustrating, as they can play well with sheet music, but have no experience improvising.

Try to remember that you weren’t good at any skill the first time you tried it. It took time and practice to master reading, writing, driving, or any other skill you possess. Improvising is no different. Don’t throw your hands up after a couple of tries and say “I’m just not good at this.” Chances are no one was good at this after two tries. When you see a pro musician improvising, you are seeing the result of years of playing around, experimenting, and trial and error. Remember you only see the result, not the years of work that got them there.

I hope you had fun and learned something valuable. The examples shown illustrate a good starting point which allows you to see how improvising works in its most basic form. I then hope you will expand on these ideas and continue to increase your improvising abilities.

The post First Steps to Improvisation appeared first on Musical U.