What if there was one scale to rule them all?

Well, there is one scale that – while it may not rule them all – is by far the most useful.

Hint: it’s not the major scale!

This is a scale that’s been around a long, long, time – maybe even the first scale ever grunted out by proto-humans back in the day. This scale, found in virtually every culture in the world, is the pentatonic, or five-note scale. And despite its ancient origins, the pentatonic scale is as fresh and new and useful today as it has ever been.

Solfa and the Pentatonic Scale

In previous parts of the Start Solfa series so far, we’ve covered the basics of finding “do” and applying solfege syllables in a given key, as well as singing and hearing intervals. Now, we will look at the pentatonic scale, and see how this particular set of intervals can help us recognize even more patterns in simple melodies.

Solfa syllables will be your best friend in remembering and being able to recall the distinct intervals used in the pentatonic scale.

What is a Pentatonic Scale?

A major pentatonic scale consists of a series of intervals starting from do:

The scale has a very distinct, pleasant sound that works great layered over many chords and other scales. As stated above, it contains the most commonly used pitches in many popular songs. Its lack of half-steps contribute to its distinct sound, as compared to a major or minor scale.

So why does the pentatonic scale sound good?

Let’s look into precisely what makes this scale so universally pleasant-sounding and easy to layer over chords and other scales.

In a major scale, the fourth and seventh degrees form a tritone. This interval introduces tension and suspense to the scale.

Here’s another way of looking at it: the major seventh and to some extent the perfect fourth intervals are considered to be dissonant in a major scale. Look at the intervals in a pentatonic scale, and going up from the root note you’ll find a major second, major third, perfect fifth, and major sixth.

Both the perfect fourth and the major seventh are omitted in the pentatonic scale, leaving only consonant intervals!

By comparison, the major scale – the scale that we first learn and which “seems” to be the basis of everything – only became popular in the beginning of the 1600s. Let’s have a look at how the major scale compares to the pentatonic.

Each major scale step can be numbered by degrees: 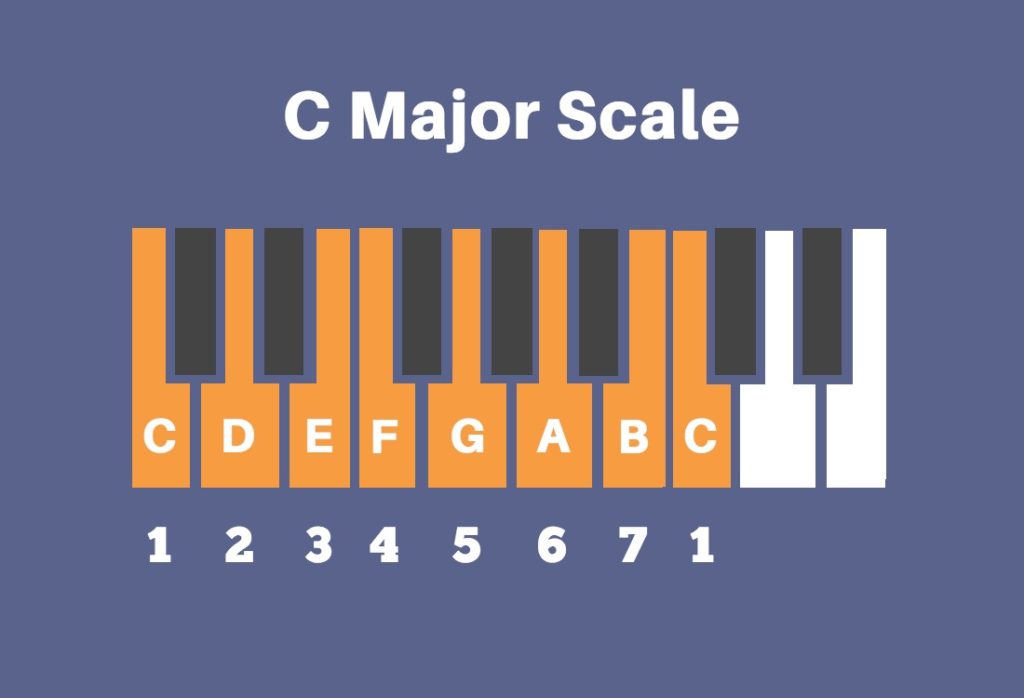 For the major pentatonic simply remove the fourth and seventh degrees: 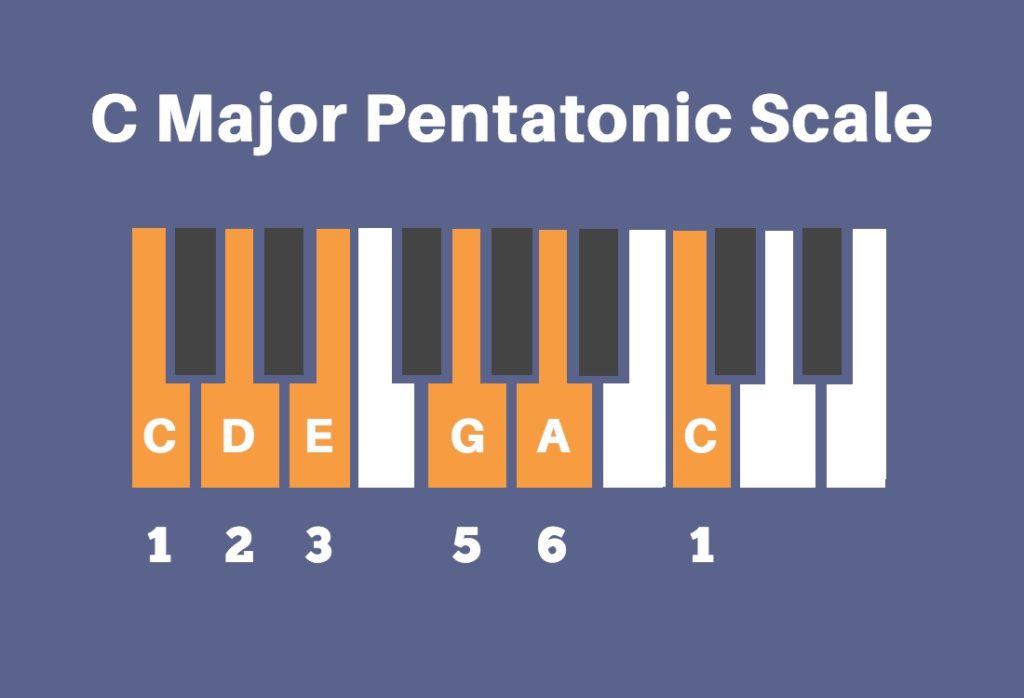 One of the best ways we can understand this musical powerhouse is through another old system (although not quite so much – it dates to the Middle Ages) – the solfa syllables (aka solfege):

Where does the pentatonic scale come from?

Another reason the pentatonic scale is thought to be an early development in Western music is the ubiquity of it throughout various epochs in music. Early Gregorian chants contained pentatonic melodies, and pentatonic scales in various forms are found in traditional Native American, African, and South Asian music.

The musical concepts of this traditional and folk music formed the basis of genres such as jazz, gospel, and bluegrass, as well as modern folk music. As these styles evolved into modern blues and rock, the pentatonic scale remained as an integral part of those genres.

Today, it’s as ubiquitous as ever, and for good reason; the pentatonic scale offers a fantastic improvisational framework for blues, rock, and beyond! In modern jazz, you’ll often hear amazing pentatonic solos whipped out by pianists, flautists and saxophonists.

The popularity of the pentatonic scale in rock and blues is justified, considering how great it sounds with almost everything: dominant seventh chords, minor or major scales, church modes, and more. Soloing with the pentatonic scale over chord progressions is very common in rock, and is an excellent exercise for beginner musicians to start improvising rock solos quickly.

What Can You Do With the Pentatonic Scale?

A quick refresher: the major pentatonic scale contains five notes instead of the usual seven per octave, with the 4th and 7th degrees of the major scale removed.

So, you may ask, if it’s just a “condensed” major scale, why use the pentatonic scale at all?

Turns out, the subtraction of these degrees is exactly what gives the pentatonic its power. Here are just some of the reasons you will want to use it:

Memorize certain patterns on your fretboard and keyboard, and you can easily transpose them into any key; see our pentatonic scale tabs below.

The church modes are either major or minor. The major modes are Ionian, Lydian, and Mixolydian, and all contain scale degrees 1, 2, 3, 5, and 6. In other words, the major modes all contain a major pentatonic scale, making it a perfect scale choice for writing or improvising in these modes, or playing over a modal backing track.

To really internalise the sound of the pentatonic scale you’ll want to practice singing it. Don’t worry if you’re not “a singer”! Start with our guide to how to sing in tune.

The solfa syllables for the pentatonic scale are Do-Re-Mi-So-La-Do. Sing along with the clip below:

Now we will sing up and down the scale, singing Do-Re-Mi-So-La-Do, Do-La-So-Mi-Re-Do.

Pentatonic Up And Down

Now try singing the scale without the audio clip. Can you produce the correct pitches without singing along with someone else? It’s harder than it sounds.

A good method for practice is to record yourself and play it back. A tool like Voice Memo on iPhone or Audacity is helpful for this, see our Audacity article for step-by-step instructions. Sometimes your brain will trick you into thinking you’ve sung something correctly, but recordings never lie. Compare your recording with the audio clip above, and see if you can match it yourself.

The beauty of this scale is how easy it is to play it, once you know the general pattern. Because it’s so ubiquitous and useful in blues and rock soloing, let’s explore the pentatonic scale shapes as they appear on the keyboard and the fretboard.

The Pentatonic Scale on Piano

Try this: start on F#, and play a scale on black keys only, ascending. What does it remind you of?

We’re guessing you can hear a distinct Oriental feel in the scale you just played, reminiscent of traditional Asian music.

The pentatonic scale is very commonplace in piano music in general. Seasoned piano players: you may have already realized that you can also play “Amazing Grace” by only using the black keys on the piano, as this song is also built on a pentatonic scale! “Swing Low, Sweet Chariot” is yet another song you can play with just these five notes. Give it a try!

The Pentatonic Scale and the CAGED System for Guitar

There are five common patterns for the major pentatonic scale on the fretboard. Known as the CAGED box forms, each pattern is named for one of the five open major chord shapes: C, A, G, E, or D.

Take a look at the five ways to play a major pentatonic scale, and see if you can spot the open chord that each is built around! 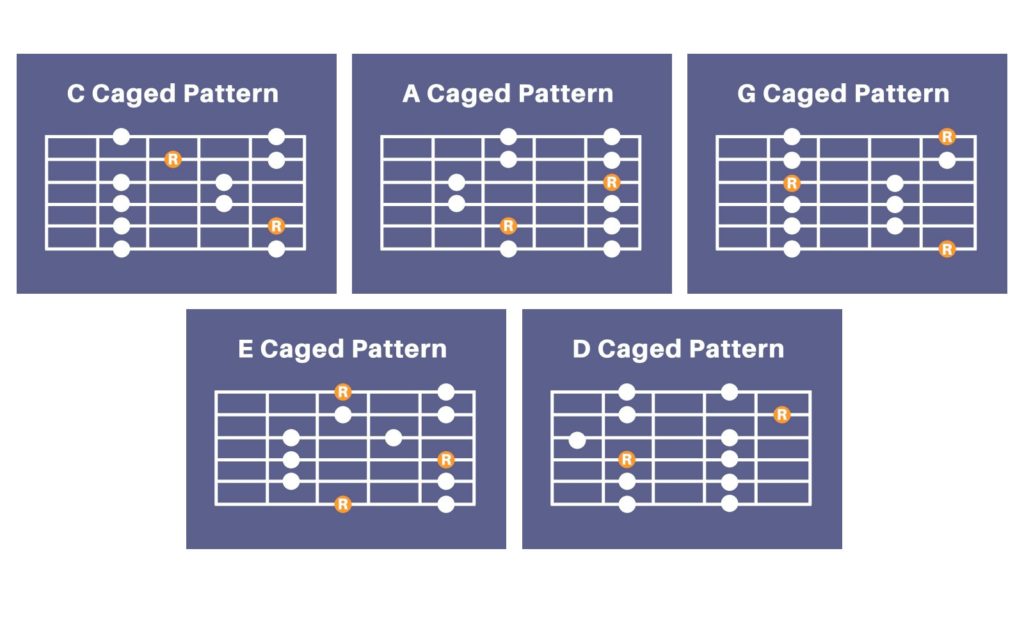 These patterns are the key to unlocking the power of the pentatonic scale on your guitar. Once you have the patterns down, you can simply move them up or down the fretboard to transpose the scale into a different key. To practice pentatonic scales most effectively, try mixing up the pattern and key you are playing in!

One advantage of pentatonic scales is that there are only five different pitches (or six if you’re counting the octave above the tonic). When trying to recognise the scale in a piece of music, you will find you can identify this scale just on the number of pitches, since other types of scales have more notes. However, it is worth using a tool like this one from Teoria.com, because if you can pick out the pentatonic scales from major scales, you will have a great advantage further down the line. To use the exercise, be sure you tick the box next to “Pentatonic Scales”, along with “Major minor”. If you already know major and minor scales, you can try to identify these as well. Challenge yourself to hear the difference between pentatonic and other types of scales.

You can also try playing the scale on your instrument, to get used to the sound of these five notes. Remember, because you know the solfege, you can play a pentatonic scale in any key where you know the major scale. Just use the Do-Re-Mi-So-La-Do notes!

For example, a pentatonic scale starting on D would be:

Here’s the scale in G:

Beyond the Major Pentatonic

The major pentatonic is a common and useful scale that is excellent to learn for beginners, as it gets you used to the pattern of notes, and gets you on your feet and playing quickly. Once you’ve nailed down the major, it’s time to explore further…

In the same way that each relative minor scale contains the same notes as its corresponding major scale, the minor pentatonic scale will have the same five notes as its major cousin!

The minor pentatonic scale is well worth learning after you master the major pentatonic. It’s used in pop, rock, country, metal, and beyond. It’s another perfect beginner scale for soloing with.

Think about it: the only real “requirement” of a pentatonic scale is the presence of five notes per octave. Therefore, there are thousands of possibilities of permutation!

Once you master the major and minor pentatonic scale, experiment with changing up some of the notes. You can even derive your own pentatonic scales from modes, by including the trademark intervals of that mode!

Want to pick up your instrument and get playing as fast as possible? Here’s some shortcuts that’ll get you playing pentatonic scales within seconds!

Now let’s look at the notes in the remainder of the major pentatonic scales in each key:

Notice that the A minor pentatonic scale is the relative minor scale of C major, and therefore uses the same notes, but starting on a different pitch.

Here are the notes used in each different key of the minor pentatonic scale:

Five Notes to Rule Them All

With its myriad of uses and its special place in nearly every genre of mainstream modern music, the pentatonic scale’s usefulness cannot be overstated. Learn its patterns on your instrument, and most importantly, practice singing along with solfege syllables to cement the pitch pattern. Producing the scale with the corresponding solfege helps connect the sounds of each scale degree with a syllable, making it more likely that you will instantly recognize the notes of a scale because your brain will process them based on their solfege identity.

Now that we’ve learned about intervals and the pentatonic scale, it’s time to move on to chords. Chords are the basis of harmony, and for anyone interested in improving their ability to hear harmony or improvise harmonies with melodies, hearing chords is vitally important. Check out the next part in this series to go even further with solfa!

The post Five Notes Will Change Your Life: Pentatonic Scales appeared first on Musical U.