A well put together backing track is a musician’s best friend. Singer-songwriter Joanne Cooper takes you through the process of making one with the easy-to-use and versatile program Band-in-a-Box!

Backing tracks are the perfect accompaniment: they’re present enough to keep you on track, but are not so overpowering that you can’t focus on your own playing. They are invaluable to soloists, songwriters, and vocalists alike.

Today, I’m going to be showing you how to make a backing track using PG Music’s Band-in-a-Box product. Using this backing track, you can do all sorts of things like play along and sing along and improvise over it, but before I get into the video tutorial, I just want to mention our video course that I’ve just finished making called, “First Song with Band-in-a-Box,” where I take you through the whole process of writing, recording, mixing, mastering and producing and also releasing your own song using Band-in-a-Box from PG Music.

Without further ado, here’s your introduction to using Band-in-a-Box to create backing tracks that will give you incredible practice opportunities:

Pick A Song, Any Song

First, choose the song that you want to use. For this tutorial, I have chosen “Amazing Grace,” purely because I don’t want to get into trouble over copyrighted material and this song is public domain. So, I’m going to be walking you through how I make a backing track for “Amazing Grace,” but you’re welcome to choose any song or a song of your own composing. I just recommend that when you’re starting out with Band-in-a-Box that you choose something fairly easy until you become familiar with the process.

Step number two is to get the basic chords for the song. If you don’t already have them, I use a site called Ultimate Guitar. So let’s just go to that site and type in the name of the song that I’m trying to make a backing track for, “Amazing Grace”. If you do this, you’ll see two versions: there’s Daniel Thomas’s version and then there’s a miscellaneous traditional version. I normally just select the one with the most stars and the most reviews. 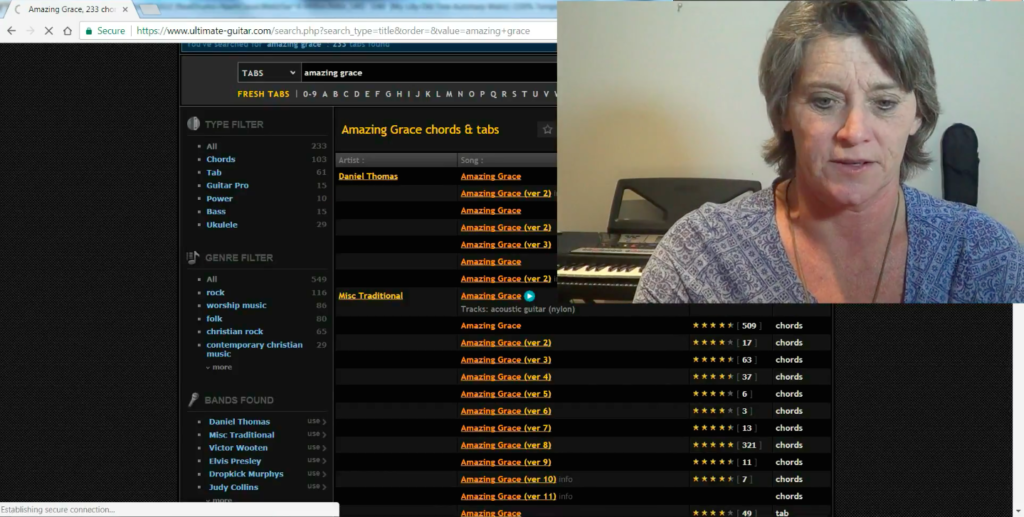 The site will show me the chords that I can use for this song. I wouldn’t worry too much at this stage what key the song is going to be in because I will show you a little bit later how to change the key and for you to practice in different keys.

Getting Started with Band-in-a-Box

Open up Band-in-a-Box on your computer, and it will open up a blank song. Change the end number of bars to something arbitrary, like 100, as that’ll give you enough space to work with. Next, change the number of choruses to one.

Have a look and see if you can find a style that you can use for your songs. If you open the star picker, you can see on the right hand side, you can type in the name of a familiar song title and it’ll give you star filters. Obviously, not all of the songs are in there, but many of the well-known songs and performances will be.

I’m just going to type in “Amazing Grace” here. Two versions exist in Band-in-a-Box: I’ve got an American traditional, which has got a folk backing. It’s a waltz and has a tempo of 85 BPM. So if I double-click that, it’ll bring up styles that will suit that song and I can audition them, and pick one that I like. 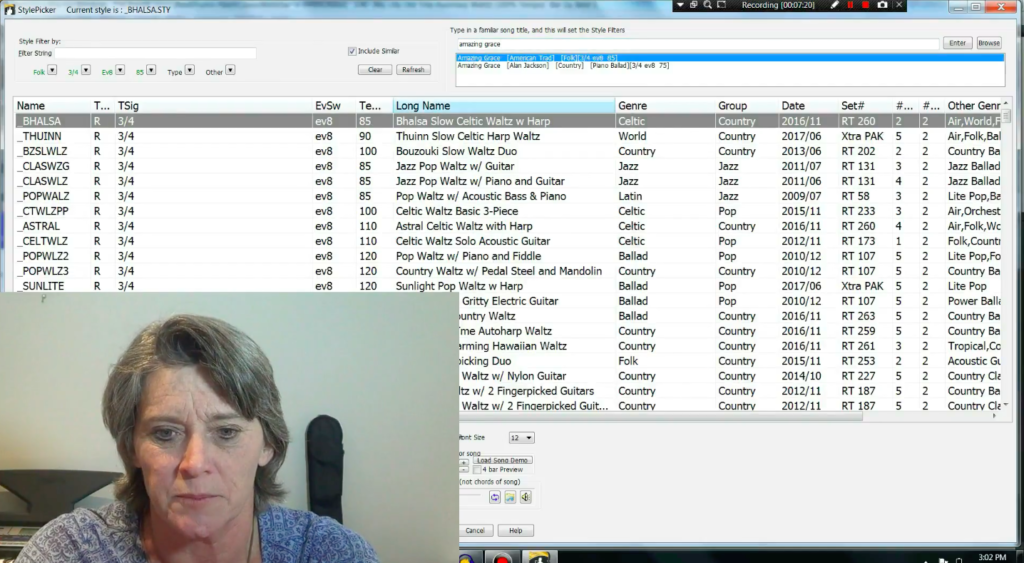 I’m going to start with my “Lilly All-time Autoharp Waltz,” so I select that style and press “enter”. You can see that the program has input the style and set the tempo at 85, and it’s giving you all the real tracks that make up that style.

In this particular style that I’ve chosen, which is my “Lilly-Style All-time Autoharp Waltz,” there’s a bass, a guitar, drums, another guitar, and there’s an autoharp. Those are the real tracks that are making up that style. Now, real tracks are actual samples of real musicians that have recorded these instruments and Band-in-a-Box is clever enough to adjust these real tracks to the chord progression key and tempo that you choose for your song!

The next thing I’m going to do is figure out the key of the song that I’m trying to make a backing track for. I can see that “Amazing Grace” is in G. Quite often, it’s the first chord or the last chord in the song. Often you can tell the key by the chord progression. You can also look for the sheet music for “Amazing Grace” and it’ll tell you what key it’s in.

This particular song I know is in G, so I’m going to select the key of G.

You need to figure out what tempo you want the song in. As a starting point, I’m going to leave “Amazing Grace” at 85 and see how that works!

So the next step is to type in the actual chords that you see here on Ultimate Guitar. I usually make an introduction of either two or four bars. For this particular song, I’m just going to leave it at two bars, so I’ve got a two-bar introduction in G and I can just start typing in the chords. I think I’ve got “Amazing grace, how sweet the sound / That saved a wretch like me / I once was lost but now I’m found / Was blind but now I see.”

Now, I’m going to listen back to that and make sure that I’ve got everything in the right place and sing along with it.

After making sure that sounds good, I’ll carry on typing in the chords. In this particular song, it’s very, very easy, because all the chords are exactly the same for the refrains and for the verses. Therefore, all I’m going to do is copy this down however many times is necessary. This particular version has four verses, and I see the end bar to be 66.

So now you have a basic backing track in the key of G for “Amazing Grace”. I’m going to show you some of the things that you can do with this track. 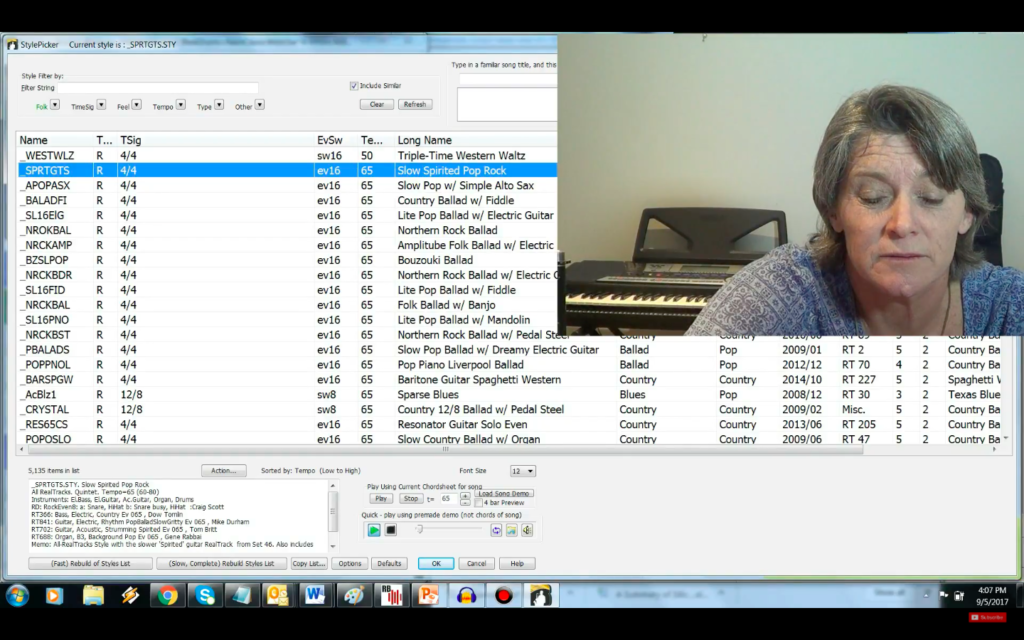 It doesn’t end there! There are countless ways in which Band-in-a-Box can improve your ear and your playing. I’ll share some of them:

I can isolate a specific instrument and try and copy how that instrument is playing. For example, I can strum along in the style that an acoustic guitar is playing in.

I can learn how to play with a capo. In this example, the key of the back track is in A, but I can play the chords with my capo on capo two as if it’s in G!

Lastly, I can improvise over the Band-in-the-Box backing tracks. Select your favorite key to improvise over (say, C), hit play, and get improvising. Once you’ve done that for the key of C, change it to the key of G and improvise over that for a while. You can carry on doing that until you’ve covered all twelve keys, by which stage you’ll be pretty good at all your scales!

A Pandora’s Box of Musicality Training

As you can see, there’s endless possibilities for this marvelous tool for you to improvise over and improve your overall musicality.

I hope you’ve enjoyed this very short tutorial and that if you have got Band-in-a-Box already you will try some of these things with making backing tracks. Check out my “First Song with Band-in-a-Box” course on my website!

Backing tracks are an incredible way to improve your chops, whether you’re aiming to nail that difficult chord progression, learn to solo, or learn to sing in tune. Try the techniques Joanne teaches in this article, and then find new ways to up your musicality using this great tool! 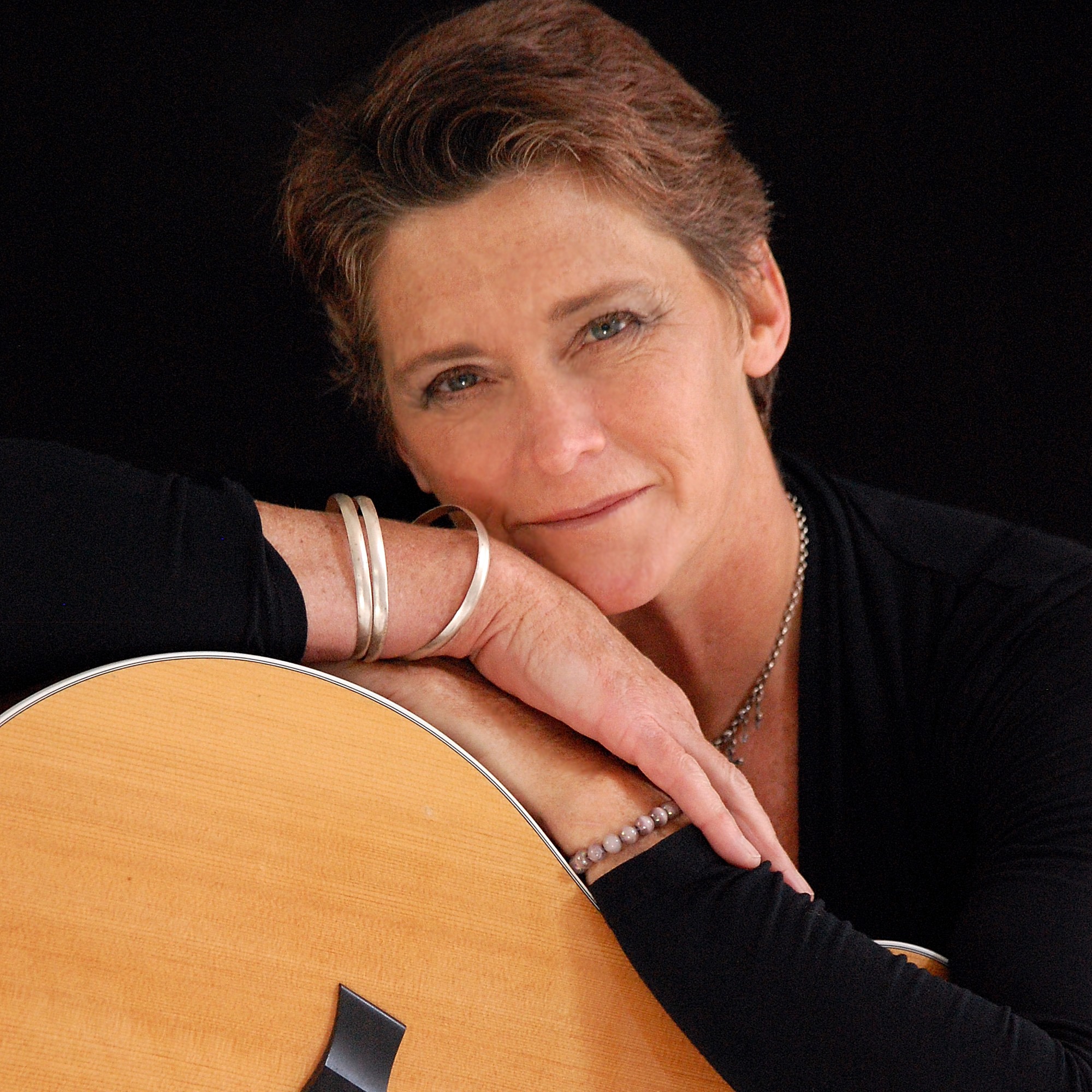 Joanne Cooper is a performing singer-songwriter from South Africa. She has been writing her own music since 2013 and has been performing and recording these songs, as well as her own unique interpretations of cover songs, in her tiny home studio in Johannesburg. She has produced and released 10 albums in collaboration with other artists and has recently had 8 songs placed in synch music libraries including this one co-written with Liz Petty called “Enough (Cement Shoes)”. Joanne writes a monthly blog post about her musical journey. She has recently created her first online course on how to record and produce your very first song using Band-in-a-Box for Windows.

The post How To Make A Backing Track, with Joanne Cooper appeared first on Musical U.