What is the rhythm of a musical life?

We desire to create, and so we seek to learn. Once we have gathered our tools, we put them to work. Step by step, we achieve mastery – and our musical work reaches out to others.

This meta-rhythmic 4/4 time of “desire, learn, practice, create” marches on through our musical lives. And perhaps our creations will live on after we’ve gone.

You come with the desire.

Composer Zoltan Kodály devised an approach to learning music that grows the musical ear for young and old alike. Our Musical U Resident Pros introduce the practice of the magical pentatonic scale. Celestial Fire mastermind Dave Bainbridge shares the secrets of applying his musical creation process. And the show must go on when the late Freddie Mercury is covered by The Art of Time Ensemble. One day in the 1920s, Hungarian composer Zoltan Kodály overheard some schoolchildren singing and was so appalled at the sound that he set out to transform the music education system in his country. Eventually, he was given an official position, and together with his teachers and classes evolved what many call the Kodály Method, although it is really more of an approach than a method.

So what does all this mean to you? The Kodály approach is interactive, collaborative, and highly kinesthetic and emphasizes learning by ear, rooted in age-old folk traditions. Many of its techniques are useful to music learners of all ages. What is the Kodály Method? will show you more.

The Kodály approach to musical instruction was unlike anything that the world had seen before. Together with Orff, Suzuki, and Jaques-Dalcroze, music education was changed forever.

Piano Dao details this fascinating shift in the way we learn music.

While the history of the Kodály approach is very well documented, there are still many preconceived notions about it that must be corrected. This blogpost from Musika sets the record straight on what Kodály is – and what it is not.

Contemporary with Kodály, a similar, though more improvisational approach was developing in Germany. Music Council of Australia has more about the Orff approach.

Kodály also has a unique approach to teaching rhythm, which uses a variety of different syllables to sing the beat. The rhythm has it’s own vocabulary, which makes it much easier to learn and teach to others. Learn more about developing a rhythmic vocabulary Colourful Keys. 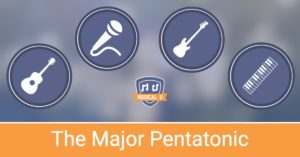 Musical U members have been thoroughly enjoying their interaction with our Resident Pros in piano, bass, guitar, and singing. This month, the Pros unveiled new resource packs for the amazing intuitive Major Pentatonic Scale.

Guitar Pro Dylan Welsh teaches guitarists to break out of the box to unleash their pentatonic creativity, Bass Pro Steve Lawson shows where you’ve already heard the pentatonic scale, and how to link it in to what you’re playing now. Piano Pro Sara Campbell does the pentatonic boogie, and Singing Pro Clare Wheeler takes these five pentatonic scale steps to new musical freedom.

How to Create from the Big Picture Last time we spoke with Dave Bainbridge (well known for his ambient Celtic progrock epics with Iona and now Celestial Fire) Dave Bainbridge revealed his years as a blues sideman – another of his many facets.

While many of us work hard to squeeze out a three minute song, Dave writes entire albums (lots of them) by starting with the concept. He generously shares his music creation process with us, and you too can learn how to start from The Big Picture.

Dave talked about how technology has influenced the process of music composition since he started back in the 1970s. To get started in creating music on your own device, Music House introduces a couple of the more popular music composition programs.

While technology has certainly made recording and producing high-quality music easier, has that made music better? Dave observed that with almost unlimited tracks it is easy to put off making musical decisions, and tempting to over-produce your next masterpiece. Pasha Music talks about the pros and cons of music technology.

When Dave writes music, he talks about starting from the “big picture” perspective, treating each piece of music as a journey from point A to B. While each songwriter has their own method, this lends itself to a greater degree of storytelling. How can you incorporate more storytelling into your music and what impact can this have on your writing? Andrew Huang has some great inspiration:

Technology hasn’t only changed the way we make music. The internet has revolutionized the way that artists are able to directly reach their audience. It is a very exciting time to be in the business as there are so many more opportunities for musicians to sell their music without the prerequisite music labels that dominated the industry for years.

With so many options available, where is one to begin? Check out this guide to selling your music online, from Bandzoogle.

“The Show Must Go On” As we reach the point of musical mastery, will our creations endure beyond the measure of our musical lifetime?

Freddie Mercury and Queen wrote the song “The Show Must Go On” as flamboyant singer neared the end of his life. Originally a defiant anthem in the face of death, Sarah Slean and The Art of Time Ensemble transform “The Show” into a passionate expression of grief. In comparing the cover to the original, we get a fascinating lesson in musical time in Before and After: Covering Queen.

The original version of “The Show Must Go On” was recorded in common time (4/4) with the strong beats on 2 and 4. The entire character of the song was transformed through a simple change to 12/8, which is a compound time signature.

What is compound time? Watch eNovative Piano break it down into this easy-to-digest lesson:

When remaking this legendary song, composer Robert Carli had a number of instruments to play with, which allowed to incorporate more non-chord tones than the original version had. Non-chord tones can add a great deal of color and interest to a song or melody. And, you have heard them in many popular songs! 12majortones analysizes how neighboring tones were used in Adele’s “Hello”.

I’m sure that this article has left many inspired to do their own remakes of classic songs such as this. But, what do you do after creating your masterpiece? RouteNote has this helpful resource to get you started in licensing your cover song before uploading it to iTunes or other digital marketplaces.

As musicians, we are in love with rhythm, and with the rhythm of our own creation. We are so much more successful with that creation when we embrace the process of desire, learning, practice, and applying what we’ve learned to create a finished work – without getting stuck in any part of the cycle. Where are you in the rhythm of your musical life? Wherever that is, embrace it and be open to what comes next.

The post Kodály Learning, Pentatonic Practice, Big Picture Creation, and “The Show Must Go On” appeared first on Musical U.