Human relationships can be so… messy.

Many of us musicians find comfort in the practice room, the simple relationship with our beautiful, beloved instruments. And with today’s DAWs, loop stations, and more technology, we can truly immerse ourselves in entire sonic worlds of our own creation.

Even so, there is nothing quite so exhilarating and fulfilling as creating music with other people.

But first, let’s have a look at the two most messily human musical instruments: the voice and the brain.

What’s in your head – and how to bring it out. 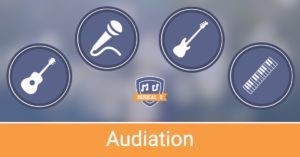 Imagine a time before you knew how to talk. When you couldn’t reach that cookie on the counter, you pointed and yelled to get someone’s attention. How much easier it became once you were able to form your desire into words!

Now we are very aware and conscious – even when thinking to ourselves – of forming our thoughts into language, whether we outwardly express them or not. So how do we “think music”?

So now imagine that your musical instrument was hardwired to your brain, and could directly “translate” the amazing sounds you are hearing in there into music we could all hear out here.

The process of hearing music in your head is called “audiation”. And you already do have a musical instrument hardwired to your brain – the amazing human voice.

Once you put your attention on audiation, you will be amazed at the powers of this hidden musical master tool.

You don’t have to become a great singer to put your voice to work in helping you both hear music more clearly in your head and translate it onto your instrument. This week our Musical U Resident Pros for bass, guitar, piano, and voice have all put together fantastic resource packs that detail the many uses and benefits for audiation and singing in becoming the musician of your dreams.

Learn more about what audiation and singing can do for you in Audiation and Singing: Resource Pack Preview. Do you remember (or look forward to) when your musical skills grew to the point where you could cover your favorite song? How you played that song over, and over, and over?

Once we’ve arrived at that point, we can be quite happy with a performance that comes closer and closer to the original that so inspired us.

Or we can take an old – and perhaps unlikely – song in a new direction.

Lake Street Dive is well known for their stripped-down acoustic covers, each of which features a tour-de-force of ensemble musicianship that would be the envy of any classical string quartet. Simply put: they love making music together and it shows!

Groove to Lake Street Dive’s soulful sidewalk version of the Jackson Five’s “I Want You Back” – and gain deep insights into the music-making process – in Before and After: Covering The Jackson 5.

There are many different ways that a musician can approach making great cover songs. But, what if you don’t have a band to work with? Joanne Cooper has a six-step process to making cover songs using Band in a Box that can help you get your creative juices going!

So, you had a great idea for a cover song. Made the arrangement and recorded it. Now what? Before unveiling your musical creation to the world, Stern will make sure that you know the legalities involved in releasing another band’s creative property.

One of the tricks that Lake Street Dive used in their cover version of this classic song was to opt for more vocal harmonies instead of call and response vocals. Where did the idea of harmonies come from in music… and how can you use them? Check out this introduction to an often misunderstood topic: counterpoint:

Now that you know a little more about how to write harmonies using these techniques, how can you approach this in your vocals? O & O has these three tips:

While the deeper music education paradigm is still geared to one-on-one lessons, the potential for collaborative music learning has still hardly been tapped. Composer Zoltan Kodály believed that music was among the most important – if not the most – important subjects to learn in school classrooms.

He established music-centered schools and curriculum across his native Hungary, and together with teams of dedicated teachers established the collaborative, ear-focused Kodály approach.

For both children and adults, the highly intuitive rhythmic and solfege syllables and other Kodály-inspired musical tools can make a huge difference in their musical motion forward.

Read An Introduction to the Kodály Method to find out what Kodály is and what it can do for you.

The story of how Kodály developed his approach to music education is a fascinating story. To learn more about how this method was created, and why it is a very natural approach to learning music, watch this video from Jaak Sikk:

Being a musician is a continuous, fascinating journey. Jamie Iglesias had his eyes (and ears!) opened to the world of solfege while studying at Berklee. While Kodály relies on the moveable Do system, Jamie found ways to incorporate both fixed Do and moveable Do into his ear training.

Kodály incorporates hand signs for each of the syllables along the moveable Do scale, which makes it easy to visually show what pitch should be sung. Cantus Youth Choirs has a beautiful presentation of these hand signs, and catchy ways to remember them.

Kodály is principally used for early childhood music education, although it can be applied to all age ranges. But, there is something to consider about how children are able to learn music at a very young age, and the impact that this can have on their overall development. The Improving Musician shares important information about when music education begins.

It’s one thing to be in love and find ready inspiration for a song. But, as Cliff Goldmacher says, you can’t just fall in love every time you want to write a song.

Now how do you find inspiration after writing more than 1000 songs? For Cliff – a long time Nashville insider pro – the answer is collaboration. Cliff loves listening to others muse about what they want to express, and shaping those musings into finished songs. His clients include everyone from up-and-coming newbies to vets like Ke$ha and the Grateful Dead’s Mickey Hart. Cliff also produces major label cuts and reaches out to all songwriters with his educational programs. Learn more about his process and how he can help you in yours with Songwriting: Inspiration and Collaboration, with Cliff Goldmacher.

Cliff left a sure track to a law career to pursue his dreams as a musician. While he found a niche as a songwriter in Nashville, there are many different ways to make a living in the music industry. Careers in Music explores the many types of jobs in the complex world of the music business.

The music industry can be an incredibly difficult market to make a living… but there are opportunities for aspiring musicians all over. How do you go about trying to break into the scene? Tom Hess has compiled seven things that musicians do out of order when trying to make their way into the industry.

Many musicians struggle when starting their journey as an aspiring songwriter. They often just don’t know where to begin when trying to write a song. But, fear not! Indie International shares their thoughts on how to learn to write a song.

There are many tools available to the modern musician that can aid in their songwriting. With so many choices, where should you begin? Learn How to Write Songs offers 10 resources for creative songwriting.

Put some “collaborate” on your plate

Are you aching to sit down with another living breathing human being and learn music, make a cover together, create a new song? Perhaps you’re just trying to get your brain, voice, and instrument to work together.

Take inspiration from this week’s Musical U posts. Yes, it can be messy. Yes, you may get hurt. But the potential rewards of creative collaboration – whether it’s between your own head and hands or between members of a band – far outweigh the risk!

The post Learn Together, Write Songs Together, Cover Together, and What is Audiation? appeared first on Musical U.