Looking for a harmonically ambiguous chord to add a little mystery to your band’s latest hit single? Or maybe you are listening to a favorite tune and are jarred by a pretty bizarre harmony starring an augmented fifth? Look no further than the rarely used and incredibly underappreciated augmented chord.

From David Bowie to the Beatles, and even a little Broadway, the augmented triad is like that one wacky cousin that no one talks about, but you can’t help liking once you get to know him! 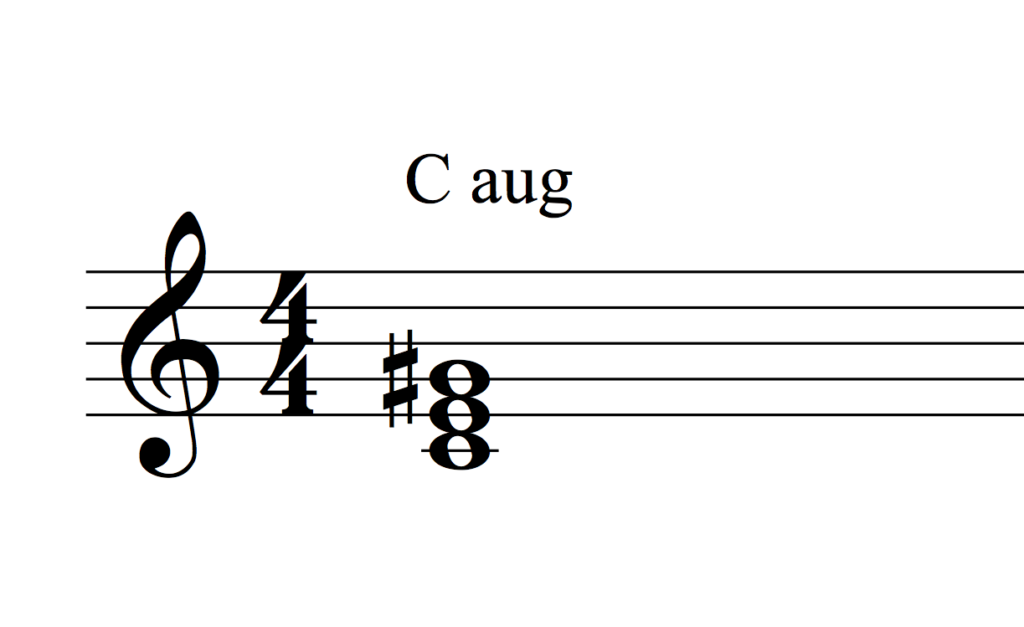 This interesting chord built on two major triads provides a very unique sound that does not occur naturally in the diatonic scale. This triad is often used to create ambiguity and atonality in a work by functioning as a substitute dominant, or is found in the harmonic minor scale as the chord built on the third degree of the scale. Since many of our favorite tunes stubbornly and consistently stay harmonically simple by sticking to four basic chords, adding in the augmented triad brings a bit of interesting flavor to a song.

The Beatles, well known for their harmonic experimentation, have a few tunes that delve into the augmented realm. “All My Loving” is an excellent example, with augmented chords in the chorus (first time at [0:54]):

However, most contemporary popular songs use the augmented chord sparingly, if at all. You will find these more complex harmonies in the rock songs of earlier years and peppered throughout jazz and blues.

In Leslie Gore’s “It’s My Party”, the augmented triad is featured prominently under “cry if I want to” in the chorus. The “+” means “augmented” and is used interchangeably with “aug”. Both will be used in this article, and you will see both in lead sheets. Listen for the augmented chords at [0:08] and all the other choruses:

You can hear this augmented chord progression here:

How do you create the augmented triad? Is it crazy difficult?

No, for all its atonal ambiguity, the augmented triad is simple.

Start with a major third: The result is two major thirds stacked on top of each other, and an augmented fifth interval between the bottom and the top notes.

Need more help learning how to build an augmented chord? Then check out this quick and easy tutorial by PianoGuyTV. Watch as he plays augmented chords on the piano. As you watch, listen for the very distinct augmented sound.

Now listen to the augmented triad a few times:

What makes this unique sound? This sound differs from the familiar sounds of a major triad and a minor triad. Listen to the augmented triad compared to the major and minor triads:

However, the augmented triad has an augmented, or raised, fifth:

In this simple exercise, you will practice singing the augmented triad and use your ear training skills.

1. Listen to the augmented triad example below a few times: 2. Listen to the augmented fifth:

3. Sing the augmented fifth with the practice track:

4. Listen to the arpeggiated augmented triad:

5. Sing with the arpeggiated example (notice that it goes for two octaves)

Learn How to Pick out the Augmented Triad

In our previous article about diminished triads, we touched upon three different ways to hear the diminished chord in a chord progression:

Depending on your instrument or voice type and musical training, you may find one way easier than another. Most musicians find that the third way, learning a chord through sounds associated with a specific chord quality, is the quickest and easiest way to learn a chord, especially a chord as distinct as the augmented triad. But we’ll chat about all three methods here.

Learning how to distinguish between chords by rote is very easy for musicians that play harmonic instruments like keyboards or piano, mallet instruments, and guitar. Because they play chords on a regular basis, many times the unique sound of a chord is easily memorized. Jazz players have the biggest advantage when it comes to recognizing augmented triads since the jazz and blues often delve much deeper into complex harmonic vocabulary than most pop music styles.

For instrumentalists like drummers, trumpet or saxophone players, or even singers, because they focus primarily on rhythm or melody when they play, being able to recognize a chord on the first listen by ear can be very difficult. In fact, it’s very well-known that while percussionists have an almost insane and uncanny ability to quickly repeat numerous dizzying difficult polyrhythms, they often struggle with harmony.

Singers or melodic instrumentalists might also struggle with listening for unusual chords, although harmonic ear training exercises are often part of their musical training.

If you would like to learn more about how an augmented chord works in a standard chord progression, check out this easy piano tutorial with Piano Lesson with Warren. Practice along and learn how the augmented chord functions as a passing tone and more. This piano tutorial also discusses using diminished chords.

Learning a chord through arpeggiation usually involves some training in singing, like using solfege. Many singers are very familiar with using solfege (a system of assigning syllables to specific notes) when they learn music theory and ear training skills.

If you’re already familiar with solfege, you can use this when learning how to sing and recognize an augmented chord. If you are unfamiliar with singing solfege, simply sing on “La”.

While this method of learning a chord via arpeggiation is helpful in more advanced ear training, most of the time a musician may be trying to simply figure out the chord progressions to their favorite songs. In that case, this is not the most helpful method.

What is chord quality? Specifically, it is identifying a chord based on whether it is major, minor, augmented, diminished, etc. Musicians often attribute a specific “sound” related to color, timbre, or even feeling, to each chord. While this is not the most scientific way of identifying a chord, it is often the simplest.

If you have played music for any length of time, you are probably aware that most pop songs sound “happy” because they stay in the major scale. On a very elemental level, we have attributed feelings to specific scales, chords, and intervals in western harmony. Interestingly enough, these societal emotional attributions to pitch do not necessarily translate well to other cultures, but they work well for our purposes here.

For example, listen to the major chord compared to the augmented chord below:

Ask yourself the following questions:

Now compare the augmented chord to the minor chord:

Learning how to compare different types of chords in relation to each other is one way to identify which chord is the augmented chord in a progression.

In Cabaret’s “Maybe this Time”, you can hear how the augmented chords are used to transition stepwise and build into the lines “I’ll be lucky” [0:15] and “For the first time” [0:27]:

This popular Broadway song demonstrates just one way that you might use the augmented triad. Because the song has very distinct jazz flavor, there is a rich harmonic palette for the listener to enjoy.

A Little Bit of Listening Practice

Check out the example below. You want to practice listening for the augmented chord sound. These examples are based on popular musical examples that we have listened to already.

For each of the musical examples: 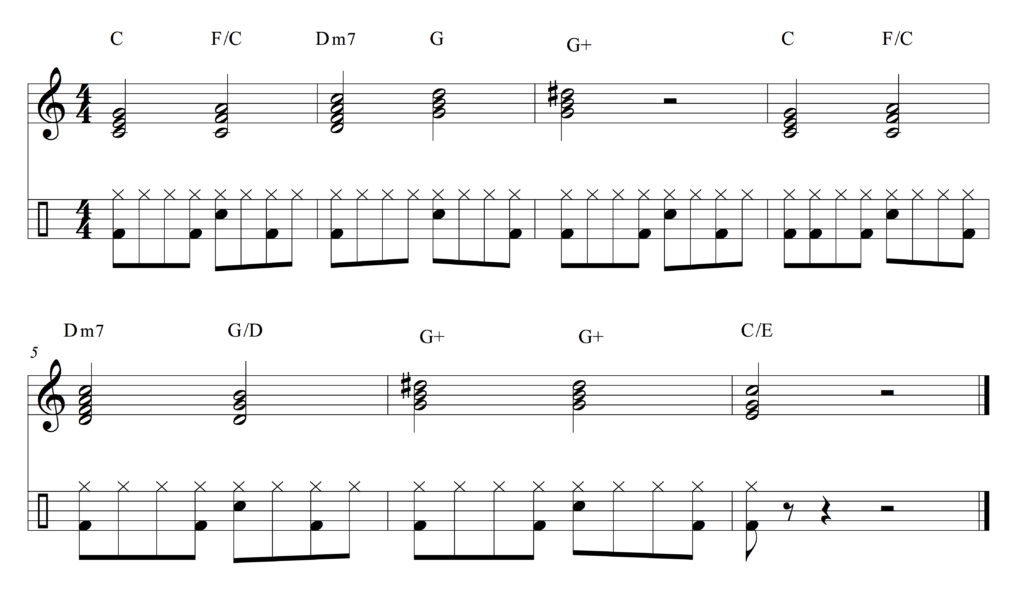 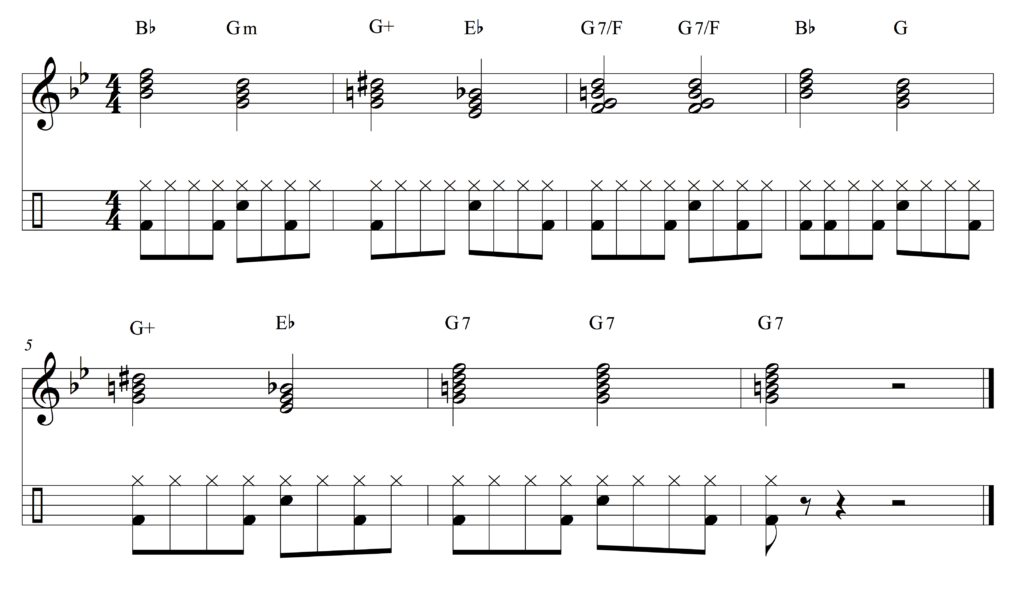 How did you do? Were you able to identify the augmented triad in the chord progression?

If not, don’t worry. Developing an ear for chords takes practice. Keep listening to the examples above, play along with your instrument, and start adding in augmented triads when you jam with your friends. Because the augmented chord can substitute easily for a dominant chord, you might find that it is actually fun to change up your sound with a little raised fifth.

While you probably won’t encounter the augmented triad too often in the Top 40 hits on the radio, you can learn how to use augmented chords in your playing to great effect.

Take a cue from David Bowie and experiment with placing augmented chords strategically to give your chord progressions that spacey, almost supernatural feel, or make like the Beatles and use the augmented chord for harmonic experimentation.

Practice the ear training method that works best for you to learn how to listen for augmented triads in music. Practice makes perfect (or at least a little better) so enjoy the singular strangeness of the augmented triad and rock on!

The post Raise the Fifth! Listening for Augmented Triads appeared first on Musical U.