When you break the whole down into its parts, you may find exciting fresh ways to recombine the elements into something new.

After 1945, classical composers opened our ears to new sonic realms when they intentionally broke down the outer limits of the very definition of music. Pieter Schrevens breaks down a highly-produced Tame Impala tune and rebuilds it with an acoustic guitar, his voice, a loop station – and a bunch of old TVs.

The Drooble team shows you where to find help in breaking down your own music and making it better early in your career.

And Musical U rebuilt its dashboard interface from the ground up so members can more easily find and access every aspect of their training.

Breaking Down to the Source of Music How far can you break down the act of creating music?

Music has its very beginnings inside us, with a secret process known as “audiation” – aka “hearing music in your head.” Audiation is actually a skill that can be grown and developed into a powerful invisible musical tool. Our Resident Pros have designed this month’s resource packs around one simple resource that unpacks the mystery of audiation and makes it work for you.

Musical U’s ever-growing abundance of resources can prove overwhelming. That’s why we’ve completely redesigned our old member homepage into a new member dashboard, which fits all the most important stuff on just one screen. Even if you’re not a member yet, learning about this new dashboard will give you a clear breakdown of the musical riches awaiting you inside Musical U.

Learn more about our new dashboard and how to develop audiation in What’s New in Musical U: July 2017.

From Breakdown to Cover-up 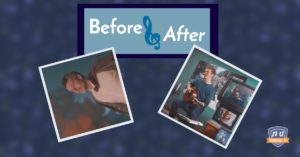 As the successful indie rock band Tame Impala set their sights on the dance floor they increased their level of looping and production, as well as stretching beyond the old three-minute song forms, including thumping dance breakdown sections.

Cover artist Pieter Schrevens also loves to loop. But rather than pouring on electric guitars, drums, and synths galore, he breaks down his elements to acoustic guitar covering both strings and percussion, his voice, and a single keyboard sound, broadcasting his loops on stacks of old TVs.

Enjoy this fabulous cover of an epic song, and learn more about looping in Before and After: Covering Tame Impala.

With so many digital recording platforms available, it can seem tough to pick which is best for you. Why not start with the one that comes with the Mac Computer: GarageBand? The software also incorporates live loops for your creative music projects. The GarageBand Guide has this tutorial to using live loops that should get your imagination started:

Looping in a studio or at home is one thing, but what about ways that you can incorporate loops into live musical performance? Certainly, you don’t want to need your laptop just to perform? Thankfully, the industry understands this, and has created several convenient pedals that can easily allow you to start looping today. Music Industry How To analyzes the 7 best looping pedals on their blog.

Most of the time, we think of looping as something that the musician will do only by themselves, as a way of replacing other band members. But music is a social activity, and collaboration with other musicians is a wonderful experience! Find creative ways to incorporate looping into a duet with this post from Looping Live.

What duet would be complete without some percussion? Wait… you don’t have a drummer? Not a problem! By incorporating percussive techniques into your guitar playing, you can loop your way to rhythmic sweetness. Get started with this video from Guitar Control:

Breaking Down the Classical Tradition After 1945, classical composers pursued a dizzying array of musical styles, techniques, and experiments. George Crumb extracted new sounds by pushing conventional instruments to their limits and beyond. Edgard Varèse pioneered experimental electronic music, seeking ultimate control over the sounds in his compositions. And John Cage gave the control of his music up to the performers, and even chance sounds in the environment. The classical music of the late 20th century breaks down the limits of what we even define as “music”.

Open your ears to the sound pioneers in Exploring Classical Music: The Modern Era, Part 3: Post-1945.

Music was changing rapidly in the post-war period, as artists experimented with new sounds and techniques that would have never been previously imagined. John Cage broke all the rules when he unveiled the prepared piano. Jesse Myers explains the process of setting up the prepared piano according to the instructions left to us by John Cage.

Experimentation with the piano has continued in the throughout the years, as artists were liberated from tonality and pre-conceived notions of normality in musical composition. This development has allowed the full scope and versatility of instruments to be explored to this very day. The Italian composer Mario Mariana performs his “Suite for (un)Prepared Piano” that will challenge your assumptions about piano literature:

Ambient music got its start during this time period, as artists like Varèse explored sonic landscapes. But, this was only the beginning of this emerging musical genre. Ambient Music Guide has assembled this list of notable new ambient music released in 2016.

Even if you are not enthralled by 20th Century Classical Music, there is a very important lesson that we can all take from John Cage and many of the other influential composers of this time: the importance of silence in music. Yes, the “The Sound of Silence” is not just a wonderful song, but a wonderful concept! Keyboard Improv expounds on what Mozart first stated, “The music is not in the notes, but in the silence between.”

Why to let someone else break you down…

You’ve been wailing away in the garage for some time now, and you’ve finally done it – you’ve come up with the next Big Thing. But how do you really know how good you sound… or not?

When you’re first starting out in your music career, feedback from others is a crucial tool for your growth and development. But where do you find someone who will tell it like it is – without making you want to go home and burn down that once-paradise-of-broken-dreams (aka your garage)? The answer is… depends. There are several ways to get that crucial feedback, and each of them has their place. One way is Drooble – an online social platform for musicians that enables its users to search for and connect with other musicians from all over the world. The Drooble team knows a lot about feedback, and share their insights in 5 Ways to Get Early Feedback in Your Career.

Taking that big step and actually asking for people to listen to your music can be a frightening moment. But there are so many things that you can learn from this process – if you are prepared for it! 6 AM Group provides some suggestions on how to get the most from feedback.

Getting feedback for your music is very valuable to your musical growth, and will allow you to focus your efforts to continue to progress. But, it should be reciprocal. Splice has published 5 tips on how to give constructive musical feedback to your peers.

Asking for input online used to seem so easy… until everyone was online! Now, with so many choices to place your music and so much competition, how can you get followers and new fans? Devumi gives expert advice at getting started in social media.

For many artists that are trying to gain exposure into the industry, networking and submitting their music to influential blogs is a very viable method. However, it’s not as easy as just sending an email or Facebook message! To perfect your pitch, and ensure that your songs are received by those that you want to listen, HipHop Speakeasy provides these helpful tips.

Of course, the biggest obstacle to receiving helpful feedback is the terror of reaching out and asking for it. Taking that first step will help you break down the fear.

And while you’re enjoying the mêlée, go ahead and break down your favorite (or least favorite?) tune and rebuild it as a cover in your own style, break down your music learning to bring the music out of your head, and break down your preconceived notions of what “classical music” is. You’ll soon find that your status-quo-busting breakdowns lead to brilliant breakthroughs.

The post The Music in Your Head, A Loopy Impala Cover, Weird Classical, and Got Feedback? appeared first on Musical U.