But are we doing so at the expense of the quality, colour, and overall character of our sound?

While you’re crafting that intricate solo during band practice, you may not realize that the tone of your Telecaster is totally flat and uninteresting. You may be so focussed on mastering that sonata that you don’t realize your piano is out of tune. You’re worried about memorizing those new song lyrics correctly – but at the expense of pronunciation and phrasing.

This week, we hone in on the topic of sound quality. We release a preview for this month’s Resource Pack on timbre, the musical key to understanding the quality of a sound. 88 Piano Keys’ Leila Viss talks about “stealing” ideas from musicians who inspire you and tweaking them to create your own unique sounds and songs. We interview indie rock band Carpool Tunnel on their powerful, guitar-driven sound, and how they honed it. And finally, we hone in on audio frequencies – a topic that goes hand-in-hand with timbre and understanding sound and music – on this week’s teaching episode of The Musicality Podcast.

Timbre is what differentiates two sounds with the same frequency, lending each a distinct, unique character – in other words, timbre is the reason your piano doesn’t sound like a bassoon. In this month’s addition to our Instrument Packs, our resident pros have put together Resource Packs on the topic of timbre – with both general and instrument-specific advice on working with timbre, from dynamics and articulation, to technique and gear.

Head over to Timbre: Resource Pack Preview for a sneak peek at the valuable tips, frameworks, and exercises that the pros have cooked up for you.

Get a group of guitar players together, and they love to talk about the tricks and tips that they have developed to achieve their sound. No matter where you are on your musical journey, there are always things that you can change that will have a lasting impact on your signature tone. Best Beginner Guitar Today offers 15 quick tips.

When we are reading about music, we often come upon myths that have become common beliefs through repetition and adoption by musicians. Musikinesis explores whether or not a pianist can change their tone by adopting different ways of striking the keys.

Question: How many basses does a bass player want? Answer: One more! As you continue playing, you’ll likely have the urge to expand your musical collection with more and more instruments. Within the bass world, there is a clear distinction between active and passive basses, and many opinions about when to use each. Alex Jennings discusses how he mixes up his bass rotation.

One thing that is deeply undervalued and misunderstood in the music world is the idea of stealing – that is, taking an idea or element from music you admire, and repurposing it to fit your own musical projects and goals. 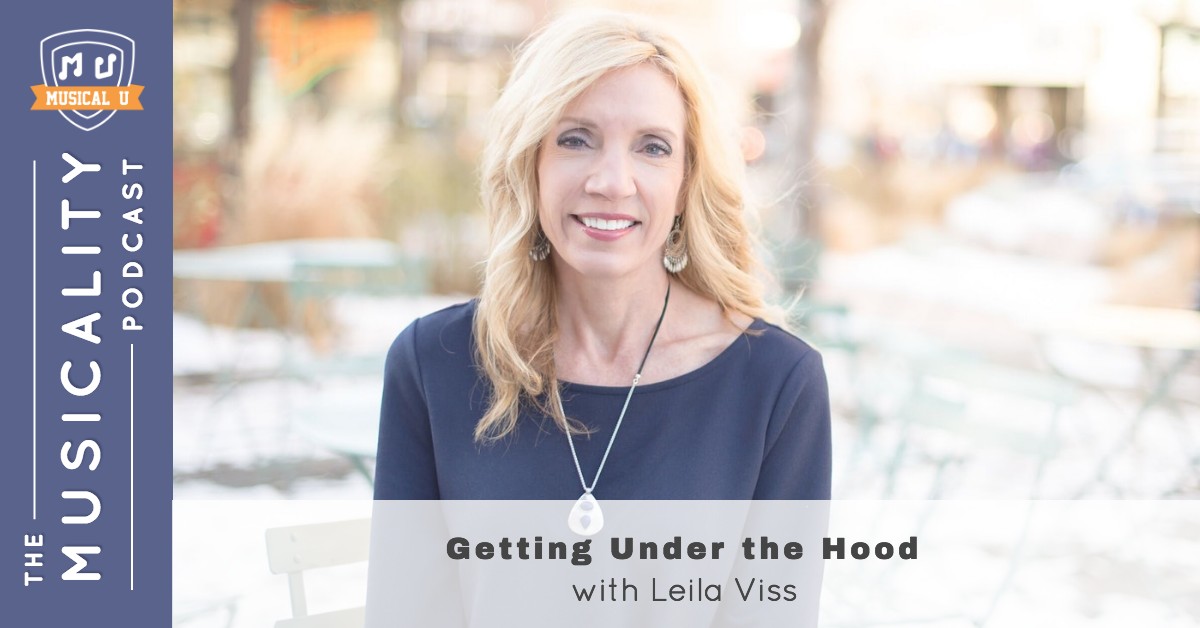 This is a far cry from plagiarism. Instead, copying often opens doors to creativity and experimentation. Though the starting point – like a short melodic motif or a chord progression – is a pre-existing idea, taking your personal brand of musicality to it can yield some unique and fascinating pieces of music.

In Getting Under the Hood, with Leila Viss, the author of the 88 Piano Keys blog talks about how copying her musical inspirations unlocked a world of creativity on her keyboard – and how she now encourages her students to use their inspirations as a starting point for their own musicality.

We loved hearing how Leila was able to take seemingly “simple” songs and understand how much musicality can be expressed through them, even when playing music that could easily be discarded as “easy”. Might Expert lists 50 guitar songs that prove themselves excellent examples.

Leila discussed how she has been particularly inspired by the book “Steal Like an Artist”, using many of its simple tips in her own musicality. This seemingly timeless book has inspired many musicians and other artists to explore their influences in their own creative expression. Daniel Hadaway discusses the lessons he has taken away from the book on his podcast.

As musicians, we often use our trusted friend, favorite tool, and keeper of rhythmic integrity during our practice sessions. Of course, we’re referring to the age-old metronome. But what about going a step further in rhythmic sophistication? Drum tracks are readily available on all devices, and as Mike Soca demonstrates, can help unleash creativity by inspiring you to get outside of your normal rhythm.

We often think of creativity as playing extravagant melodies and swooping solos, but creativity also exists in your ability to use rhythm. There are many simple approaches for becoming more creative in your use of rhythm. Josef at the Creative Piano Academy demonstrates some exercises that will have you plugging away at new rhythmic variations in no time at all.

You and your bandmates likely have a strong glue that holds the band together – a glue consisting of shared dedication, goals, and musical sensibilities. 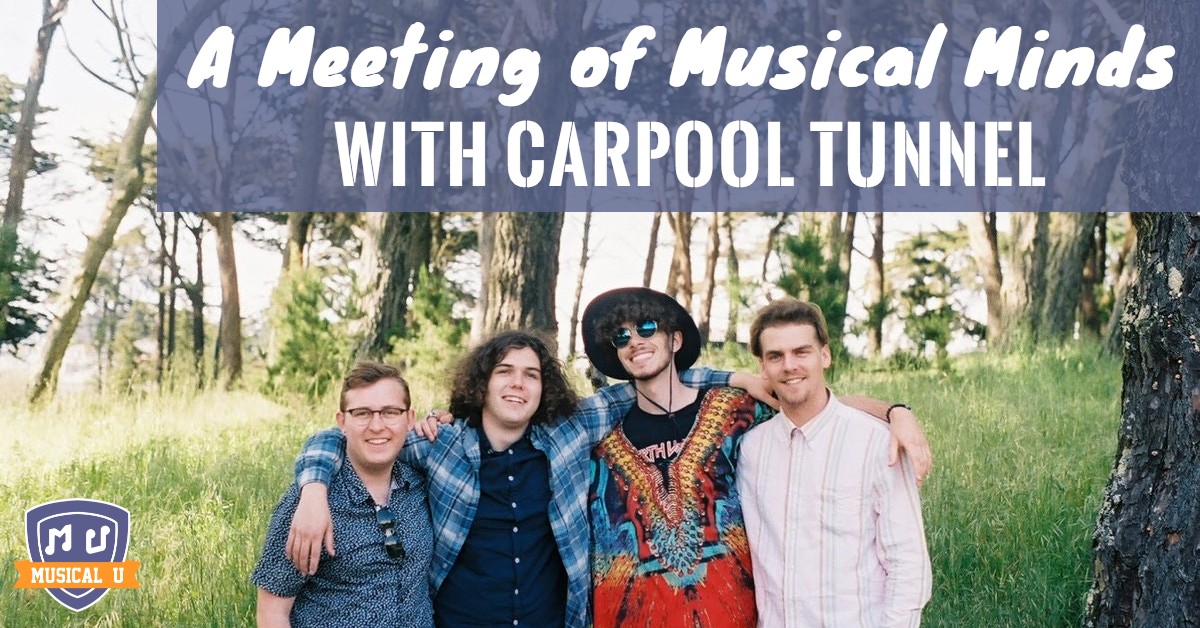 This week, we interview San Francisco-based indie rock band Carpool Tunnel, a band with a melodic, seriously punchy sound whose members met through Vampr, an app dedicated to fostering connections between musicians.

In A Meeting of Musical Minds, with Carpool Tunnel, Musical U sits down with the band to ask about their music journeys and influences, how they connected online, and the band’s involved, open-ended songwriting process.

Starting a band can be exciting, inspiring, and… terrifying! How do you find other musicians? What are the first things that you should do when you finally get together? The Denver Music Institute has gives 5 tips to get you started.

Many bands begin by simply taking common tunes that everyone knows and jamming on them. This simple yet powerful act of just playing music together can form the foundation of your musicality and help you learn what everyone’s playing style is like. Most of these tunes will have three or four simple chords, as demonstrated in this video from Guitareo.

This week, we’re back with another installment on audio frequencies in music and why they matter – this time, focussing on the two major reasons that any musician should learn about them in the first place.

In About Frequencies in Music, Part Two, we discuss how sound is defined in terms of its frequencies, what this means for your instrument, how frequencies can be manipulated, and how this manipulation affects the perceived sound of your playing.

If you want to take the first step towards understanding sound in a complete, clear, and comprehensive way – don’t miss this episode!

Imagine if you were no longer able to hear certain frequencies. Unfortunately, that is something that we will all face as we get older and our ears begin losing some of their natural abilities. Fortunately, there are some things that we can do to protect our hearing as much as possible. Learn more about musicians and hearing loss from The Musician’s Brain.

Mixing music is easy, right? You just adjust this knob, bump up that slider, and things just work. Except that’s never the case! Unfortunately, that’s exactly how many musicians first approach working behind the console. Sound On Time explores the art of mixing music, with excellent tips on handling frequencies, panning, gain, and soundstages.

Learning more about frequencies and the science of music is part of the bigger picture of becoming more musical, no matter where your musical interests lie – and ear training happens to be a critical part of this development! Nathan Lively from Sound Design Live discusses the impact that just 30 days of ear training had for him.

The Specifics of Sound

Frequencies, timbre, tone, color, quality – these are all interrelated ways of thinking about the same overarching concept – how your instrument sounds.

Sound quality is a beautiful thing – it can breathe new life into your well-loved scales, chord progressions, riffs, solos, and melodies, and lend you a deeper understanding of your instrument and the many ways to play it.

The next time you pick up your instrument, think about the character of your sound – is it something you wish to alter, either by using a pedal or with equalization, or perhaps by altering your technique and articulation? Does it sound different depending on the room you are playing in? How can you experiment with it to achieve sounds that convey different tones and moods from what you’re used to hearing?

The post Timbral Possibilities, Steal Like An Artist, Musical Minds Think Alike, and Facts About Frequencies appeared first on Musical U.